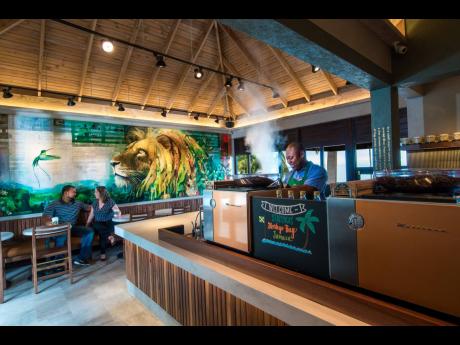 In this file photo, the first of what was to be a chain of 15 Starbucks stores to be operated in Jamaica by Coffee Baristas Limited opened officially on November 21, 2017 at Doctor’s Cave Beach in Montego Bay.

The Starbucks franchise in Jamaica has transitioned from a niche brand geared at tourists to a household name that now aims to build out a chain of 25 stores coffee shops.

“We will have 15 stores in the short term and 25 in the long term,” said Joey Epstein, managing director of Starbucks Caribbean.

The 12th store is slated for opening this month in the Mall Plaza in St Andrew. The company will employ 18 people at the location, 14 of whom are trained as coffee baristas.

Starbucks Jamaica opened its first store at Doctor’s Cave Beach in Montego Bay in 2017. It was followed by three stores in the Sangster International Airport in Montego Bay which formed part of the franchise’s initial thrust towards targeting travellers already familiar with the brand. The company then added eight stores across Jamaica.

The next stores are slated for Red Hills Road in St Andrew and then Portmore, Epstein said.

The brand is now the largest retail coffee chain in Jamaica, followed by Café Blue and then Cannonball, both of which are locally owned.

As of now Jamaican coffee beans are absent from the local Starbuck stores. But Epstein said that’s about to change with a big deal that’s in the works. He declined to comment on the contours of the deal, citing ongoing negotiations.

The demand for Starbucks products and its wood-themed ambient lit lounges has attracted both young and adult consumers. Patrons may either just be chatting or doing remote work on their laptops. That’s because Starbucks is seen as a ‘third place’, a place between home and your office, Epstein said.

“We started with the hospitality market and then went to Kingston, and we found that the demand was massive with Jamaicans,” he said. “It is really selling itself, but then we added Jamaican elements to the menu including cocktail patties.”

Jamaicans are generally attracted to popular US franchises, but such interest can fade over time. That’s unlikely with Starbucks, and by extension other vibrant cafés, because the beverages are caffeinated which stimulates repeat buying.

Over the years, the typical drink ordered at Starbucks has morphed from milky-white to brown-coloured beverages. It signals that customers are demanding heavier doses of coffee.

It’s a colour scheme that franchise-holder Ian Dear has also noticed. “Yes for sure,” he told the Financial Gleaner about the shift in colour tones and changing coffee consumer preferences over the years.

Previously, rural Jamaicans grew their own coffee trees for sale and consumption of the beans. However, the spike in the price of local coffee largely from the demand from Japan in the 1970s, however, resulted in a shift in the market towards bean exports and local consumption of hot beverages moving more towards instant coffee, powdered cocoa and teabags.

Today, Jamaicans are playing catch up with Americans on the consumption of fancy brewed coffee.

Starbucks, which is an American company, largely drove the development of the coffeehouse culture in the United States and then scaled it to the world. In 1971, Starbucks opened its first location in Seattle, but focused on roasting coffee.

The new culture started to brew in 1982 when Howard Schultz joined Starbucks as its director of retail operations and marketing. Initially, Schultz focussed on selling coffees to fancy restaurants and companies. In the following year, he travelled to Italy and having witnessed the café culture in that country, convinced the then owners of Starbucks to test a coffeehouse concept in Seattle.

In 1985, Schultz set up a company called Giornale and sold brewed coffee made from Starbucks beans. In 1987, he bought out Starbucks with the backing of local investors and within three years grew the store count to 84.

In 1996 Starbucks opened its first store in Japan which also became its first store outside of North America. By 2000 it operated some 3,500 stores which grew to 17,000 by 2010 to over 32,000 stores by 2020. Starbucks International currently has 34,000 stores worldwide having withstood the worst of the pandemic, according to its latest quarterly results.