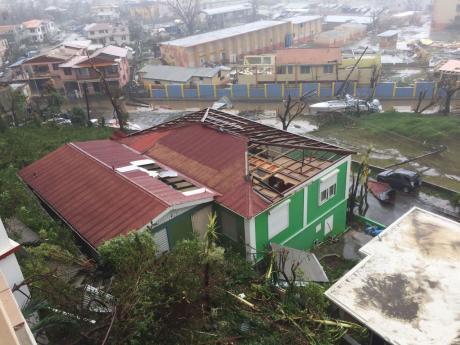 Lieutenant Colonel Kester D. Weekes of the Trinidad and Tobago Defence Force (TTDF) has been handling the logistics at the Terrance B. Lettsome International Airport, where a number of flights have taken CARICOM nationals to Barbados and Trinidad and Tobago.

“It has been going particularly well, it was a bit slow at the start, but I think, despite the challenges of little to poor communication, the word had gotten out and between the Caribbean Airlines flight and the aircraft from Barbados, yesterday, we able to get out in excess of 60 people,” he told the Caribbean Media Corporation (CMC).

Weekes is a member of the Caribbean Disaster Management Agency (CDEMA) rapid needs assessment team deployed to the BVI after the Category 5 hurricane slammed into the British Overseas Territory with winds in excess of 180 miles per hour last week, claiming at least seven lives, and damaged or destroyed between 60 to 80 per cent of buildings on the multi-island.

Weekes said that nationals from Trinidad and Tobago, St Vincent and the Grenadines, Barbados, and Guyana have taken advantage of the opportunity to leave the hurricane stricken island. IN PHOTO: Boats piled up after the passage of Hurricane Irma in the British Virgin Islands - Contributed

“And, of course, we had a series of second generations children who were born to CAIRCOM members states parents but were nationals of the British Virgin Islands,” he told CMC, adding that the ages of those who chose to leave range from six years to a couple in their 70s.

He told CMC that he did not inquire into the particular reasons why the persons wanted to leave the storm-ravaged territory.

“I did not get into the too much of the rationale behind their departure. My little part was to try as best as possible to facilitate their quick movement off of the island.”

Weeks said that the persons who were repatriated did not complain about any health issues “other than inability to recoup their medication. “In the elderly couple’s case, that would have been an issue,” he told CMC.

“Regarding security issues, nothing different from what the current islanders are feeling themselves with the threat of looting and the threat of miscreant behaviour by some of the people who are presented themselves over the last few days.”

Colonel Weekes said the flights were organised by CARICOM governments, but said he was unable to answer “with any degree of clarity” a question regarding how long the flight will continue, “other than to say now I am again pulling together a list of persons as they come to me to put together a listing of Caribbean people who would be willing to depart from the BVI”.

On Thursday, regional carrier, LIAT, started limited flight operations into St Marteen and Tortola in the British Virgin Islands, both of which were severely affected by the passage of Hurricane Irma. IN PHOTO: A windowless Scotiabank building and damaged vehicles are surrounded by debries in the aftermath of Huricane Irma in the British Virgin Islands.

With the relief flights, LIAT is only transporting passengers out of these destinations.

The flights come at a time when some nationals of Guyana and St Vincent and the Grenadines were living in Virgin Gorda in an emergency shelter whose roof was damaged during the storm.

Vincent Wheatley, a senior government official, with responsibility for Virgin Gorda, Jost Van Dyke and Enagada suggested that non-nationals who cannot find work should leave the territory in the wake of the storm.

On Wednesday, Camillo Gonsalves, Minister of Economic Development in St Vincent and the Grenadines, said during a visit here that he was heartened that Vincentians were not among the persons queuing up at the airport to leave BVI. Earlier this week, the Foreign Secretary of the United Kingdom Boris Johnson arrived here to see first-hand the damage caused, and what needs to be done to help these communities and according to a statement issued by Governor Augustus Jaspert on Thursday, “along with the Premier, we agreed that security and distribution of aid were priorities.

“Extra money has been provided for recovery by the UK … to help with the ongoing relief efforts for which people here are working tirelessly.”

But Jaspert said that control of security for nationals “continues to strengthen, with additional forces coming from the UK and other countries in the region.

“A curfew is still in effect from 6 p.m. to 9 a.m., and we ask residents to adhere to this. At all times, please stay off the roads unless absolutely necessary to enable clear passages for those working to restore utilities, clear roads and deliver aid. We are asking that the public does what they can cooperate.”