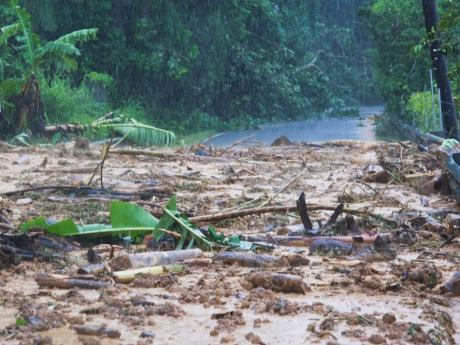 A road is blocked by a mudslide caused by Hurricane Fiona in Cayey, Puerto Rico, Sunday, September 18, 2022. (AP Photo/Stephanie Rojas)

HAVANA (AP) — Hurricane Fiona roared over the Dominican Republic on Monday after knocking out power across all of Puerto Rico, causing damage the governor said was “catastrophic.”

No deaths had been reported, but authorities in the United States territory said it was too early to know the full scope of damage from an expansive storm that was still forecast to unleash torrential rain across Puerto Rico on Monday.

Up to 30 inches were forecast for Puerto Rico's southern region.

As much as 15 inches were projected for the eastern Dominican Republic.

“It's important people understand that this is not over,” said Ernesto Morales, a meteorologist with the National Weather Service in San Juan.

He said flooding reached “historic levels,” with authorities evacuating or rescuing hundreds of people across the island.

“The damages that we are seeing are catastrophic,” said Governor Pedro Pierluisi.

Before dawn on Monday, authorities in a boat navigated the flooded streets of the north coast town of Catano and used a megaphone to alert people that the pumps had collapsed, urging them to evacuate as soon as possible.

Brown water rushed through streets, into homes and consumed a runway airport in southern Puerto Rico.

Fiona was centred 35 miles southeast of Samana in the Dominican Republic, with maximum sustained winds of 90 miles per hour on Monday morning, according to the US National Hurricane Center. It was moving to the northwest at eight mph.

Tropical storm force winds extended out for 150 miles from the center.

Forecasters said the storm was expected to emerge over the Atlantic in the afternoon and pass close to the Turks and Caicos islands on Tuesday.

It could near Bermuda as a major hurricane late Thursday or on Friday.