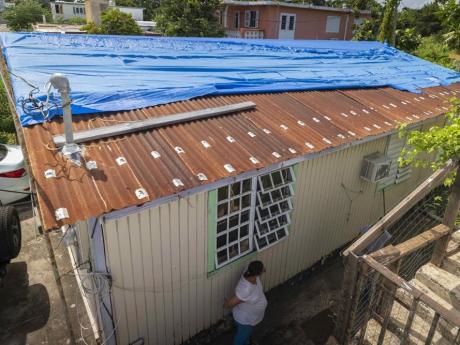 LOÍZA, Puerto Rico (AP) — Jetsabel Osorio Chévere looked up with a sad smile as she leaned against her battered home.

Nearly five years have gone by since Hurricane Maria struck Puerto Rico, and no one has offered her family a plastic tarp or zinc panels to replace the roof that the Category 4 storm ripped off the two-story home in an impoverished corner in the north coast town of Loiza.

It's a familiar lament in a U.S. territory of 3.2 million people where thousands of homes, roads and recreational areas have yet to be fixed or rebuilt since Maria struck in September 2017.

The government has completed only 21% of more than 5,500 official post-hurricane projects, and seven of the island's 78 municipalities report that not a single project has begun.

Only five municipalities report that half of the projects slated for their region have been completed, according to an Associated Press review of government data.

And with Hurricane Fiona forecast to hit Puerto Rico on Sunday with torrential rains, more than 3,600 homes still have a tattered blue tarp serving as a makeshift roof.

Puerto Rico's governor and Deanne Criswell, head of the US Federal Emergency Management Agency who recently visited the island, stressed that post-hurricane work is underway, but many wonder how much longer it will take and worry another devastating storm will hit in the meantime.