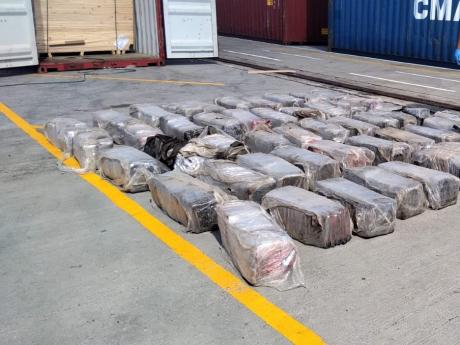 Jamaican authorities had confirmed that a shipment of 1,549 kilos of drugs had been intercepted at Bustamante port in Kingston. - Contributed photo.

PARAMARIBO, Suriname, CMC – The Public Prosecution Service in Suriname says the cargo of more than 1,000 kilos of cocaine intercepted in Jamaica earlier this month did not come from that country.

The office was responding to media reports in Suriname about the January 14 bust at the Bustamante port in Kingston that the cargo of illegal drugs may have come from Suriname with China as its final destination.

It said that through the Judicial Intervention Team (JIT), the Public Prosecution Service made inquiries with the police, customs and the military intelligence service of Jamaica and it is clear that the drugs did not come from Suriname.

Jamaican authorities had confirmed that a shipment of 1,549 kilos of drugs had been intercepted at Bustamante port in Kingston.

The container with the drugs was on the ship CMA CGM VERACRUZ from Cartagena, Colombia.

The JIT said that the container ship CMA CGM VERACRUZ is too big for Surinamese waters and that is why it can “indicate with certainty that the ship and the drugs did not originate from Suriname”.