Kamina Johnson Smith | All hands on deck with Windrush 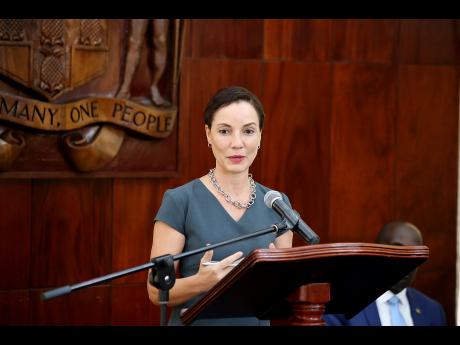 The editorial of Sunday, September 9, 2018 concerning the Windrush crisis has presented an opportunity to share some details on the Government's response to this truly tragic situation.

Jamaica's high commissioner in London, along with the other members of the CARICOM caucus, had, over time, consistently petitioned the British government to respond to the situation at the highest level. Most recently, on the occasion of his visit to London for the Commonwealth Heads of Government Meeting, Prime Minister Holness, along with other CARICOM heads, met with British Prime Minister Theresa May in April.

Speaking on behalf of his CARICOM colleagues, Prime Minister Holness stressed the importance of outlining clear procedural steps that would ensure that the rights of the Caribbean migrants are restored, as well as the critical importance of the payment of compensation to affected persons.

By the end of April, the Consular Affairs Department of the ministry had begun a process of identifying potential Windrush victims and bringing them to the attention of the British High Commission. Our high commission in London was similarly engaged in advising and guiding our nationals to the Windrush Task Force to pursue their claims to British citizenship and compensation.

In our efforts to identify persons affected, we ran advertisements in Jamaica in the two main daily newspapers, on our website, and on social-media platforms. This process resulted in a list of 35 individuals, who were each interviewed and referred to the British High Commission. We have also provided assistance to the British High Commission in identifying contact information, including next of kin for several persons, with the assistance of the Passport, Immigration and Citizenship Agency and the Registrar General's Department.

Through our direct interventions with the British Government, we are aware that three individuals have been issued with entry clearance for the UK; another four applications for entry clearance are being considered; seven persons were invited to submit entry clearance applications; two were advised to apply to have their deportation orders revoked, with a view to regularising their immigration status; and only two were deemed ineligible as Windrush cases. Efforts are being made to have the other cases addressed.

In ensuring that the matter continued to retain the highest level of attention, Prime Minister Holness wrote to Prime Minister May to follow up on the issues raised in their April meeting and the assurances received. The minister of state, Senator Pearnel Charles Jr, and I have maintained dialogue with our ministerial counterparts in the UK and take every opportunity to pursue just and fair redress for all affected Jamaicans.

We are currently working with our diaspora in the UK and consulting with the Attorney General's Chambers to make inputs towards a document on the proposed design of the compensation scheme published by the Home Office, for which stakeholders have been invited to make submissions. By so doing, we want to ensure that the interests of our affected nationals are protected.

We continue to carefully monitor and offer our support to nationals affected by this tragic situation and I have been briefed regularly on developments as they unfold. Just last week, the ministry was instrumental in having expedited attention given by the British High Commission to a Windrush senior citizen with a family emergency in the UK, which included absorption of the cost of her travel, as well as visas for three accompanying family members. We hope that through our ongoing efforts, other persons whose cases are deserving of attention will be identified.

A resolution of the Windrush immigration situation, including fair and just compensation for victims, remains a high priority for the Government of Jamaica. We are confident that the British government will deliver on its commitment to that end.