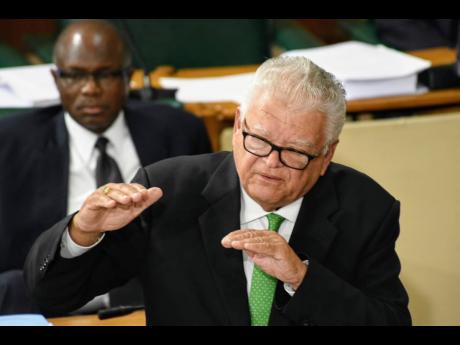 Karl Samuda made a brave but fruitless attempt on Tuesday last to sugar-coat the dismal Primary Exit Profile (PEP) results. He is to be commended for appreciating that the call for the grade scores rather than only the band placement for each pupil is legitimate. He has relented and promised that individual results and the national grade aggregates will be disclosed, probably this week.

The minister, inadequately advised on the floor of the House, made much of the “stigma”, the embarrassment, from which the ministry feels constrained to shield the half of 40,000-plus students from their own inadequacies. Respectfully, this is a false argument.

A permanent blight, much worse than any feeling of failure, is the cruel expedient of advancing pupils to grade seven when we know that their competence in English and mathematics, as well as their social and nutritional standards, make it impossible for them to achieve high-school excellence. It is the Government which fears the shame, not so much the children.

As Karl speaks, the MP sitting near me tells the story of 70 per cent of the entering students at a particular striving secondary-school reading at grade three level or lower. Sadly, this is not atypical. Listen to Dayton Campbell relate the mismatch of placement and capacity at a new high school, hastily baptised by Elder Reid, on the St Ann coastline.

Come with me to a strong Manchester primary school, where attendance and outcomes peaked because of a state-sponsored breakfast programme which was abruptly, and without explanation, stopped months ago, with predictable long-term negative effects.

Remember, too, that the minister confirmed Michael Stewart’s assertion that half the students are on the well-intentioned but meagre PATH welfare, while easily a further 20 per cent need help but are so far excluded.

Now that we have comfortable Budget surpluses, the minister’s call for more resources for our schools must be fully supported. The flat and declining education budget is a disgrace and must be remedied by reallocation now.

Otherwise, how will the massive plan for remediation in grade seven, which Karl Samuda posits as the cure-all by grade eight of all the PEP deficiencies, be afforded? Where are the host of reading, mathematics and behavioural experts going to be found, and how shall they be paid? The truth is that these skills are exiting the education system faster than we are training them. And which are the schools where intensive summer remediation is taking place, and at what cost?

This crisis is too serious for any more face-saving illusions. Last week, hear Horace Chang lament the 70 per cent of boys in a section of St James who drop out of school by grade nine. This is the real origin of the crime problem.

I suggest a six-week, expert remedial course in language, mathematics and social ethics, prepared for free-to-air television, cable and social media, thus giving all students a reasonable opportunity to catch up. Were the episodes related to the PEP questions and with the individual student profiles, one could recognise mistakes and learn from them.

Another large primary school which I visited recently recounted that last year, based on the deceit that the State provides all needed money, their intake of an $8,000 auxiliary fee had dropped by 40 per cent. But when it came to graduation, everyone had paid up $10,000 for the ‘package’. So what kind of priorities, underpinned by what wholesome values, are being transmitted to our children?

No, Minister, primary education is not yet going in the right direction. It needs to be said over and over again until thoroughgoing changes are made. During the parliamentary exchange, not one of the government members expressed a single concern. They just looked vacant and clapped.

Ronald Thwaites is opposition spokesperson on education and training and member of parliament for Kingston Central. Email feedback to columns@gleanerjm.com.