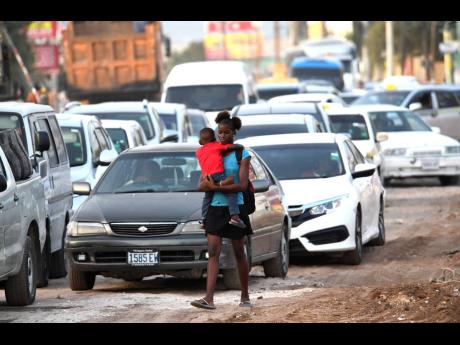 Ricardo Makyn
A pedestrian, with infant in tow, walks past vehicles on an unpaved section of Hagley Park Road, which has been the scene of major works for more than a year.

I heard that the powers that be are unhappy when citizens express concern for the way that the Legacy roadworks are being carried out. Many are located in the bowels of major projects and experience at first hand how Jamaicans suffer.

Their occasional plaintive utterances mean less than nothing. No complaint has been addressed and no suggestion to make life much easier for the many victims of the projects has been taken seriously. The couldn’t-care-less attitude continues, but something else concerns me.

In December 2018, the National Works Agency (NWA) reported that “… major works on all the Legacy road infrastructure projects should be completed by the end of March 2019”. The total cost quoted was US$168.3 million.

I expect that paying that off should span two or more generations.

My concerns are the long hiatuses between site activity, the unnecessary destruction of subterranean telephone cables, and, apparently, water pipes (we’re going to pay for those one way or the other), the wanton destruction of traffic, road and business signs, including mine, the repeated digging and refilling of the same spots, and the recurrent altering of work already done.

Citizens are afraid to speak out lest they be (metaphorically) doused in orange paint. But their silence makes us all suffer. There was a poll that claimed that most people accepted the necessity of the dislocation and losses incurred by the victims along the roadworks corridors. But the poll should have been confined to the affected businesses and residents. People who are unaffected, or only barely affected, should not have been polled.

The Legacy projects would cost much less if they were properly planned so that all the things needed to go into various excavations were prepared ahead of time. The projects have all the markings of many trials and many errors. Each time that I see digging equipment return to the same sites over and over, I see US dollars rising up in unison with the dust. You and I and our children’s children will be paying for that.

The road signs that were unnecessarily destroyed and ‘given’ (probably sold by onsite workers) to scrap metal collectors must be eventually replaced. In the interim, the affected roads remain unmarked and cause commuters to lose their way and wander many kilometres, lost and distressed. Sometimes they give up and business is lost forever. I have a friend who ended up in Payne Land very late one night. He called me for help. He could have been attacked; he was lucky.Innumerable businesses have suffered, and are suffering, major financial losses. Some businesses succumbed. Many people (from babies to the very elderly) have become ill because of the ubiquitous dust. Amenities have been disrupted for months.

Pedestrians have twisted ankles, hurt themselves falling over rocks, and many vehicles have been damaged by and because of the Legacy roadworks. One driver plunged into a hole and died. Our Government has made it crystal-clear that nobody has anything to get.

It seemed obvious to me, and others, that the new Hagley Park Road surface is extremely high in places. And, since Hagley Park Road transforms into a virtual river when it rains heavily, I foresee severe flooding on the side roads. I do not believe that the little drains will suffice. Perhaps the contractors realised this, because I observed a length of the newly marled and rolled Hagley Park Road surface being removed. That’s a sure sign of ineptitude and/or carelessness.That’s going to cost us.

No local contractor could get away with that sort of work. Isn’t our Government supposed to look out for its citizens and how billions of US dollars are spent?