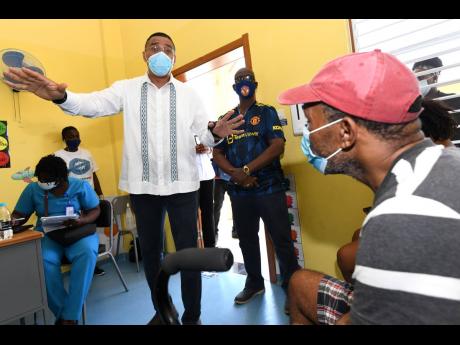 Last week I listened to a utopian-sounding interview involving tourism gurus John Byles and Clifton Reader, during which I realised that a new State called ‘The Resilient Corridor’ had seceded from Jamaica.

They seemed anxious to convince America’s CDC (who had advised Americans to avoid Jamaica like the plague) that The Resilient Corridor’s positivity rate was 1.04 per cent, despite the rate for parishes in which the new State was previously located exceeding 40 per cent. Were they using Antigen tests that we all know issue more false negatives than PNP’s recently invented critique of July’s entertainment re-opening? Or were they fantasizing based on crass self-interest, so needing to distance tourism from gross domestic product?

In my consequential daydream, The Resilient Corridor’s cabinet was chaired by Prime Minister Mister Ed. Wan Blys was Tourism Minister, while one Cruff Raider was named Minister of Foreign Affairs. Immediately after the first cabinet meeting ,Mister Ed said to international media, “We are no longer a part of the plague-infested country known as Jamaica. No American need ever set foot in that nation again. We welcome all Americans to The Resilient Corridor. We support CDC’s advice not to travel to Jamaica.”

At a follow-up press briefing, the Tourism and Foreign Affairs Ministers issued a joint communiqué to CDC assuring that The Resilient Corridor’s COVID positivity rate was less than two per cent.

Then I woke up remembering that, in their radio interview, Byles and Reader regurgitated the mischievous mantra, “even if vaccinated you must follow protocols”. So? Does this mean we shouldn’t vaccinate? Or is it a desperate attempt to justify further endangerment of Jamaicans by evading fully vaccinated status mandates for visitors? Is this another shameless attempt to sacrifice Jamaican lives on the altar of the almighty tourism dollar? Was my dream really a daydream or portent of another Nightmare Weekend?

A couple days later, PM, while on a “vaccination tour”, was asked why he isn’t considering insisting all visitors to Jamaica be vaccinated. He trotted out another mutation of the well-worn viral argument: “It would raise the question, why are you preventing unvaccinated people from coming into Jamaica when only five per cent of your population is vaccinated?”

You’ve already failed to protect unvaccinated Jamaicans, firstly with treacle-slow, inefficient vaccination roll-outs, and then by a politically cowardly refusal to impose sensible vaccine mandates which provide many with the social cover they need to take the jab they already want to take. You’ve already issued an open invitation to Old MacDonald to visit and bring his entire farm of COVID variants with him. Here a Mu; there a Mu…

There’s no escaping the patently necessary world policy for every nation to fully vaccinate QUICKLY and, in any event, before the common enemy can mutate until it circumvents vaccines. That objective is more easily achieved if all tourism destinations accept ONLY vaccinated tourists. Why wouldn’t Jamaica want to be a leader in achieving that obvious ideal? Elementary, my dear Watson. THAT would be too egregiously in breach of Goodman’s Law which is, ‘Don’t ask if it’s about the money. It’s ALWAYS about the money’.