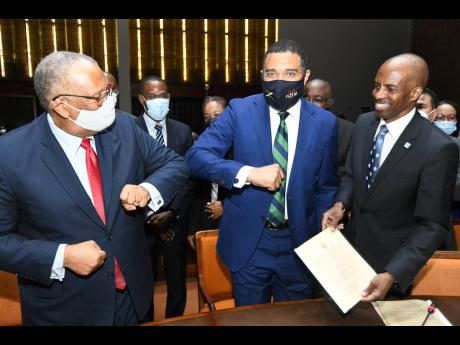 File
In this file photo, on Monday, August 3, 2020, Prime Minister Andrew Holness (centre) and then Leader of the Opposition, Dr Peter Phillips (left), knock elbows COVID-style after the signing of a memorandum of understanding between key stakeholders on a National Consensus on Crime at the Jamaica Conference Centre in downtown Kingston. Looking on is Lloyd Distant, chairman of the Working Group. 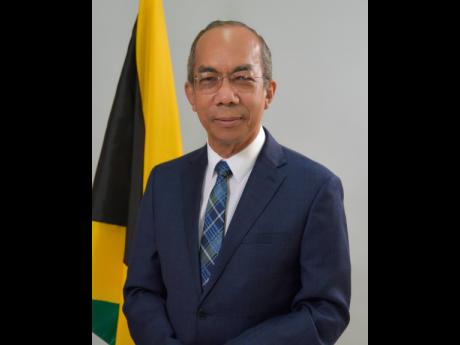 The ‘co-leader’ of the present People’s National Party (PNP) leadership (Peter Bunting) is denying that there is a National Consensus on Crime that supports the use of States of Public Emergency when required.

I will now outline elements of the consensus that clearly indicate that we agreed to this.

Keen observers will note the circumstances surrounding the signing of the consensus. When we signed, we had to contend with the factional posturing of members of the Opposition, particularly Mr Bunting. Attendees to the meeting were aware of his attitude to the discussions, having walked out of the debate on several occasions.

It is not then surprising that now that the gentleman has ascended to the position of ‘co-leader’ of the PNP, that he would be objecting to sensible agreements got through compromise between the Government and the then leader of the PNP, Dr Peter Phillips.

His posture has nothing to do with the facts, but rather is an attempt to turn back the hands of time to rewrite provable history.

In August 2020, the Government, Opposition, and key stakeholder representatives agreed to and signed the National Consensus on Crime, and I now quote the following part:

“We will support the use of the military, as permitted by law, in geographic areas where the homicide rate is above 32 per 100,000 (i.e. 2 times regional average), where the JCF determines it is incapable of controlling this violence with their current resources and capability, and the Commissioner of Police along with the Chief of Staff of the Jamaica Defense Force agree that it is necessary. We acknowledge that there should also be sustained public engagement on the use of such an intervention.

In these instances, whenever TRIBUNALS are required, they will be established within 24 hours of the military being deployed and its composition published. Resources will be in place to provide the public defender the flexibility to increase capacity as needed. Detainees will be provided improved access to the tribunals, and inspection of lock-ups and detention centres will be carried out daily by Lay Magistrates or Parish Judges. Additionally, an accountable officer will ensure all detentions are justified and will ensure that detentions can be challenged in a timely manner. The Office of the Public Defender will ensure that there is independent oversight in reviewing and evaluating detentions.

The process of withdrawing the military should be informed by a joint report/assessment from the Commissioner of Police and Chief of Defence Staff. In addition, there will need to be:

a) “We will support the use of the military” – The military works collaboratively with the police, however, there are only two circumstances in which the military operates with police powers: States of Public Emergency (SOE) and Zone of Special Operations (ZOSO).

b) “In these instances, whenever tribunals are required” – Tribunals are only required when a State of Public Emergency is declared. The Law Reform (Zone of Special Operations) (Special Security and Community Development) Act does not require tribunals. They operate with a Social Intervention Committee, which is appointed and gazetted within five days of the declaration of a Zone.

c) “Detainees will be provided improved access to the tribunals” – The detention of persons of interest is common to both SOEs and ZOSOs. However, as outlined in point B (above), tribunals are only required in a SOE.

The use of strong legislative activity such as SOE is a better approach in a democracy to control high levels of violence. We agree that there is need for additional trained police officers, but to suggest that just putting more boots on the ground will solve our current challenges is patently wrong and presents as uninformed posturing.

In modern policing, in our Western democracies, excessively large police forces can lead to a police state. Those who are calling for just more boots on the ground must recognise that without comprehensive action, such as legislative changes and strategic use of constitutionally sound provisions, this is just returning to a type of policing that perpetrates persistent violence and loss of lives.

The fact of the matter is that the National Consensus on Crime begins by outlining conditions in which the use of the military “as permitted by law”, which includes the SOE, would be supported, and proceeded to specify the required conditions “whenever tribunals are required”. This clearly refers to the State of Public Emergency and is the basis upon which the agreement was reached.

The National Consensus on Crime indicates the clear commitment of all signatories to supporting the use of SOEs, a most critical tool for saving Jamaican lives.