Tony Deyal | Quick on the drawer 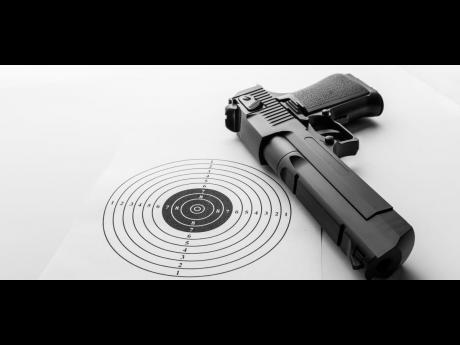 P.G. Wodehouse, the great English humourist, in The Code of the Woosters, wrote this classic play on words, “I could see that, if not actually disgruntled, he was far from being gruntled.” Now that a rapidly weaponising Caribbean has both gone for higher and guns for hire, one either has to bite the bullet or respond in alarm or concern, “Oh shoot!” In Wodehouse words, are you ‘dis-gun-tled’ or merely ‘guntled’?

I am not sure how many of you remember the Carpenters song, We’ve only just begun with the unforgettable lines, “Sharing horizons that are new to us / Watching the signs along the way …” Well, I can sing you the song of the present where it’s only just ‘big-gun’, and the signs along the way are terrifying. The headlines say it all. A recent one in The Gleaner states “Three more guns found as Stadium East operation continues.” Another headline, ‘Guns galore’, detailed “an avalanche of murders” where “Killings have surged more than 16 per cent in the first 22 days of the new year with 111 people murdered … .” According to the New York Times, in an article on ‘How American Gun Laws Are Fuelling Jamaica’s Homicide Crisis’, “Hundreds of thousands of guns sold in the United States vanish because of loose American gun laws. Many reappear on the Caribbean island, turning its streets into battlefields …. American firearms are pouring into neighbouring countries and igniting record violence.”

Some of the guns reach Jamaica by way of Haiti. A Gleaner article revealed, “An arsenal of close to 100 brand-new high-powered firearms and hundreds of assorted ammunition were confiscated by the police in Haiti … authorities have indicated that several of them were destined for Jamaica’s criminal underworld.” I wanted to tell my friends at the Gleaner, this was more than an article, it was a ‘bulletin’.

NOT LIMITED TO JAMAICA

The unprecedented rise in the availability of guns is not limited to Jamaica. In late November last year, the Barbados Government Information Service (GIS) reported that, for the past three years, there was a spike in gun-related murders in that country and it was linked to a rise in gang activity and the easy availability of firearms.

However, in Trinidad and Tobago, Venezuela and the US were the major suppliers. However, the Trinidad Express of Sunday, January 23, 2022, referring to a recent report by Stanley John, a retired Appeal Court justice, stated: “‘A thriving well-oiled, white-collar criminal enterprise’, in respect of the grant of firearm user’s licences (FULs) and other restricted licences, was being conducted ‘under the nose’ of then Commissioner of Police Gary Griffith.”

Whether they are sins of commission or the commissioner, I have always known that, despite what the Carpenters believed, it has not just begun. Long before the COVID-19 pandemic, we in the Caribbean have been experiencing a ‘gun-orrhea’ epidemic in which the police have always been involved. In 1953, my father legally acquired a shotgun which he got on the basis of a police-supported claim that he had an estate. Before he had reached man’s estate, he was already working in the sugar estate, but that was as far as he got. However, the gun meant that he had enough in his estate to pay the policeman. In 1989, the day after my father died, a police inspector came to my mother’s house, demanded the shotgun and took it away with him without leaving a receipt.

In 2003, on my way to a new job in Belize, I left my licensed firearm at a police station near the airport. When, in 2015, I finally returned to Trinidad, and having been assured by one of my cousins, a policeman, that the firearm was at the station, I went to collect it. I was told by the senior officer that all the guns had been shredded by an American group brought in by the Government. Then, later, I received the news that there was no record of my leaving a firearm because the police station had been destroyed by a fire. So, I asked, “OK, I can understand the fire, but what about the arm?” Now I am worried that the firearm is still listed as belonging to me and, if it is found on the scene of a crime, I might be held responsible and will not only have many questions to answer but, because of this and other articles, might go from police ‘cuss-tody’ to ‘custody’ which, I was told, includes putting your testicles in a drawer and slamming the drawer shut. There is no mention about what happens to your drawers in the process.

NEVER GOT A REPLY

A few years ago, I twice wrote to the previous acting commissioner laying out the issue of my “missing” gun and my concerns. I never got a reply and my subsequent request, almost a year ago, to be able to buy a firearm, based on the licence I had, was ignored. Yet, 6,832 firearms licences have been granted in the past three years and one applicant received 20 firearms in one year. In addition, the report states, “Requests for varying sums of money have been made of applicants by police officers attached to the Firearms Permit Section and senior officers in some divisions, to assist in the issuance of firearms user’s licences.” The commissioner, who supposedly approved those permits, has threatened legal action. In many ways, the whole scenario is so weird that it reminds me of the Johnny Cash song about A Boy Named Sue versus the Black and Decker ad for Stanley tools which are “dependable any way you cut it”.

In 2009, a Trinidad newspaper headline read, ‘Funeral homes make a killing’. This went way beyond the rubric of the National Rifle Association (NRA) of the US that “guns don’t kill people, but people kill people”. In fact, in addition to the undertakers in the funeral business, others making a killing from the killings are gravediggers, hearse drivers, flower-shop owners, tailors, and last, but certainly not least, the gun sources and resources throughout the Caribbean and elsewhere, including importers, exporters, sellers, renters, makers, go-betweens and other facilitators, especially the police at all levels in almost every country. I did a quick check of “police officer charged ...” for various crimes. Under Jamaica, I got twelve million, two hundred thousand (12,200,000) in .48 seconds. Barbados came up with 1.66 million in 46 seconds, and Trinidad with 3.6 million.

In considering the firearms acquisition process in the region, as well as basic gun control, I go with what Andy Borowitz, the American satirist, said, “Maybe this is crazy, but I think the right to own a gun is trumped by the right not to be shot by one” and “Maybe I’m a dreamer, but I wish mental health care was as easy to get as, say, a gun.” To all this, comedian Chris Rock added, “I think every bullet should cost $5,000. Because, if a bullet cost $5,000, we wouldn’t have any innocent bystanders.” Actually, I would reserve the death penalty for everyone found with bullets in their possession, except the Lone Ranger and Clint Eastwood.

Tony Deyal was last seen saying trying to get back his firearm because he and many other Caribbean people are like Chris Rock, who said, “I live in a neighbourhood so bad that you can get shot while getting shot.” Send feedback to columns@gleanerjm.com