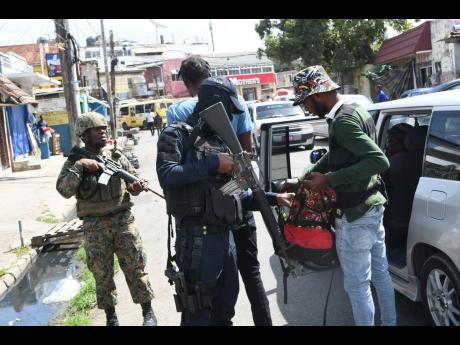 Rudolph Brown
Those powers may well be exercised from the moment of the declaration of an SOE, without people who are affected by its powers, and the public generally, knowing whether the agents of the State are behaving in accordance with the rules, or are acting beyond their authority.

That the Government, in the face of the court’s findings in the Roshaine Clarke case, is further reviewing the regulations governing the state of emergency (SOE) in the parish of St Catherine – announced last Friday – is quite logical.

After all, in a decision delivered only hours after Prime Minister Andrew Holness’ announcement of his administration’s return to the use of SOEs to combat crime, a three-member judicial panel ruled that elements of the regulations under which Mr Clarke was held, in an earlier exercise of emergency powers, were unconstitutional. He was, therefore, wrongfully deprived of his liberty. Mr Clarke was awarded J$17.8 million in damages.

So, according to the attorney general, Derrick McKoy, the Government wants “to make sure that all the regulations are consistent with the (new) judgment”. Yet, this is not a sufficient explanation of why the regulations, as they ought to have existed before the court’s ruling, were not issued contemporaneously with the announcement of the St Catherine SOE. Or, for that, why there always seems to be a significant time lag between the declaration of SOEs and the publication of regulations that govern them.

This is no moot, esoteric observation. The proclamation of a state of public emergency gives significant powers of search and detention to the security forces, and, therefore, the authority – within specific parameters, as the courts have now emphasised in two decisions – to deprive citizens of normal constitutional freedoms.

NOT TO BE TAKEN LIGHTLY

That ought not to be taken lightly. Those powers may well be exercised from the moment of the declaration of an SOE, without people who are affected by its powers, and the public generally, knowing whether the agents of the State are behaving in accordance with the rules, or are acting beyond their authority.

That the announcement of the St Catherine regulations was not coincidental with the declaration of its SOE is, in the circumstance, egregious. In September 2020, Justice Bertram Morrison, in a ruling even more expansive than the one delivered by the Full Court last week, similarly held that many of the regulations governing the detention of people under a rolling series of SOEs that started in 2018 were unconstitutional.

New questions indeed have been raised in the ruling by Justices Stamp, Nembhard and Carr in the Roshaine Clarke matter. But that ruling was after the fact, even if it came only three hours after the announcement of the St Catherine SOE.

It would be to suspend disbelief if it were accepted that Prime Minister Holness, when he scheduled the announcement of the St Catherine SOE for 8 a.m., was not aware that the delivery of the court ruling in the Roshaine Clarke case was planned for 11 a.m. It would be obvious that the outcome of that case might require a review of the St Catherine regulations. If he was not informed, someone should be held to account.

The bottom line, however, is that the eight o’clock announcement of the St Catherine SOE was cast before time. It was before 11 o’clock. Its accompanying regulations should have already been drafted and ready for simultaneous publication, especially given the Government’s continuous signalling of its intention to return to SOEs and the long lead time it had since Justice Morrison’s ruling.

Given the seriousness with which Mr Holness says he takes democratic norms and fundamental rights, this should not happen again. The accompanying regulations should be published at the time of the declaration of a SOE and well ahead of its 14-day life, unless it is extended by Parliament.