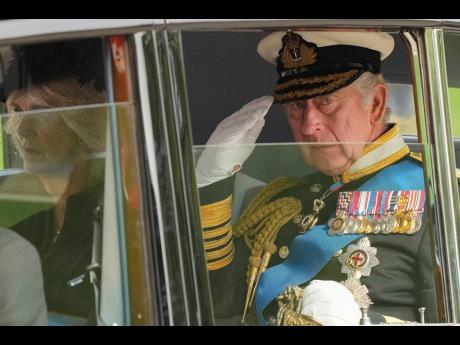 AP
King Charles III salutes as he leaves Westminster Abbey following the state funeral service of Queen Elizabeth II in Westminster Abbey. He faces the task of preserving a 1,000-year-old monarchy that his mother nurtured for seven decades but that faces an uncertain future. The challenge is immense.

In Julius Caesar, William Shakespeare made an important point about the death of royalty, “When beggars die there are no comets seen; the heavens themselves blaze forth the death of princes”. That was then. This is now. When beggars die, there is...

In the case of Queen Elizabeth II, she was neither expected nor expecting to be queen but, when her grandfather, King George V, died in 1936, his first-born son, King Edward VIII, took over the job. He lasted 325 days until he adamantly chose to keep Wallace Simpson, the love of his life, and give up the British throne. This is how the Calypsonian, Blind Blake and later, Harry Belafonte, interpreted the King’s behaviour, “It was love, love alone / Caused King Edward to leave his throne.” Elizabeth’s father, George VI, became King, and Elizabeth, at 25, while touring Kenya, learned that, in the oldest and greatest of British traditions, “The King is dead. Long live the Queen.”

It was not an easy transition. During the Second World War, Princess Elizabeth became a mechanic, learning how to service and drive military vehicles. On the last day of the course, George VI saw his daughter, in her greasy overalls, working underneath a car. Try as she would, she could not get the car started. “What?” asked the King with a smile. “You haven’t got it going yet?” He had surreptitiously removed the distributor.

Pulitzer Prize-winning Harvard Professor Caroline Elkins, writing in TIME said, “For many Britons, the Queen was a steadying force, revered by her subjects for the virtues — duty, honor, and devoted service — she embodied and symbolized. Others, including those from the former empire, refuse to mourn, condemning Elizabeth II for alleged direct knowledge of and complicity in British colonial crimes, including murder and torture. Some see her complicity as more subtle, obscuring through decades of reassuring rituals and acts of omission the systemic racism and extreme violence upon which Britain’s imperial power, and hers, depended.”

When the Queen and Prince Phillip visited Jamaica in 2002, even though the sun never set on her empire, the lights went out on them. I saw it as a mixed message and, to some extent a warning from the Almighty. It has been said that the sun never set on the British Empire because even the Almighty would not trust an Englishman in the dark. In the same vein, it was possible that the blackout in Kingston reflected Britain’s loss of power and status in the 50 years of the Queen’s reign and HE was planning to reign her in or out. Or then again, whether outage or outrage, it could have been an attempt by the same Almighty to point out to us our inadequacies in maintaining the institutions left to us by the British when power (including the utilities thereof) changed hands.

What I found interesting is that, when I looked at the rigidly groomed senior citizen that Elizabeth II had become, I still saw traces of the young mechanic. She had not wanted to be queen and had started to pray for a brother when it was clear that she was next in line. She fell in love with Prince Phillip when she was 13 and pursued him until they got married in 1947, a wedding that Winston Churchill described as a “bright ray of colour on the hard grey road we have to travel”. What always took me by surprise was her sense of humour. In the Bahamas, when her host used a silver pencil, taken from his pocket, to swizzle a drink, the Queen commented, “That’s all right in our company, but what happens in high society?”

On May 28, 2018, one of my favourite stories about the Queen was on the British television programme, Antiques Road Show. Despite my wife’s comments (“I really love antiques and that is why I married you!”), a former palace footman told a story he heard from the royal chauffeur. The Queen, the Queen Mother and Princess Margaret were invited to a friend’s house that was on a country lane. A constable on his bike decided to stop the car from passing through. The chauffeur quietly explained to the constable who was inside the car and suggested that he let them pass. The constable was not convinced and replied cheekily, “If you think I’m going to believe that, then I’m Roy Rogers on Trigger.” The Queen quietly wound down her window and, when he saw her, the young policeman was stunned. She then said kindly, “Young man, I think you better ride off on Trigger.” However, the Queen then wrote to the chief constable commending the young policeman for his dedication, and he was subsequently promoted.

I was not promoted, or even demoted, but closer to being deboated, floated and bloated when I got my first opportunity to see the Queen from close up. We grew up singing God Save The King and, when the Queen was crowned on June 2, 1953, I was an eight-year-old in standard three and we all sang the new lyrics “God save our gracious Queen”, and then received small tokens of the event and a large treat.

This is why, steeped in all the lore and always curious, I wanted to take a look at the Britannia anchored in the Gulf of Paria during the Queen’s visit to Trinidad and Tobago in early November 1985. I had a little boat and we headed out one morning to where the royal yacht was anchored offshore. We approached it at speed, and that was part of our undoing. The yacht was well guarded and, perhaps fearing an attack of some sort, two fast vessels moved out to intercept us and maybe shoot across our bows or even sink us. I cut the engine and we put our hands up, scared spitless. A loud, crisp command came over a public-address system commanding us to move away. Fortunately, the engine started with one tumble and we hauled gas out of there so fast that even the dolphins could not keep up with us.

But I kept up with the Queen and the big question now is, “What happens to the British monarchy in the days and years ahead?” In 1992, things looked really bad for the Queen and her ménage. An Oklahoma newspaper listed, “Andrew’s separation, Fergie’s nude photos, Anne’s divorce, Di’s love tapes, Charles’ philandering and fears that Edward the youngest would come flying out of the closet any day. Now, so many years later, despite the sniping and griping, her death caused even Boris Johnson to talk sense, “As is so natural with human beings, it is only when we face the reality of our loss that we truly understand what has gone. It is only really now that we grasp how much she meant for us, how much she did for us, how much she loved us.”

Tony Deyal was last seen asking whether King Charles can trust PM Truss who once saw Royalty as “disgraceful” but now boasts about being “a strong supporter”. Send feedback to columns@gleanerjm.com