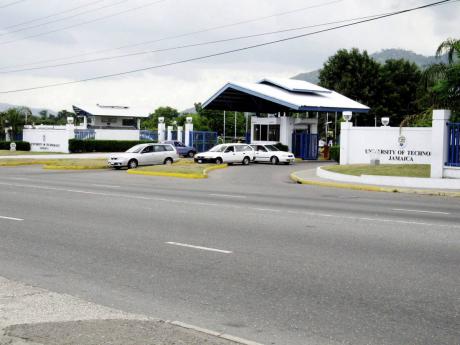 File
The entrance to the UTech campus.

The Gleaner’s editorial, “Chance for UTech revamp”, published on September 29, seems to express a rather interesting view that the University of Technology (UTech) was losing its way from the path of science and technology. The editorial expresses...

The Gleaner’s editorial, “Chance for UTech revamp”, published on September 29, seems to express a rather interesting view that the University of Technology (UTech) was losing its way from the path of science and technology. The editorial expresses, almost with sadness, that more than four in 10 students at UTech were enrolled in non-STEM disciplines. It seems to lament that a university with the word ‘technology’ in its name could be offering courses in the social sciences and in other non-STEM disciplines. Oh darn! Now Jamaican students have more options regarding where they want to study. What is the real issue here?

The editorial fails to highlight that with an annual government subvention slightly less than that given to many high schools, all programmes offered by UTech could never be STEM-based. Contrary to popular assumptions, science and technology courses cost a lot of money.

Also expressed, was the desire to see UTech transformed into a ‘world-class technology academy’. I wonder where it was felt the funding for this would or should come from. To go further, the suggestion is made that UTech’s venturing outside of traditional STEM courses would lead to “an inefficient use of the institution’s limited resources”. This was where my mouth fell open. Non-STEM courses are the cheapest courses to operate. The over 4,000 students who enrol in business courses at UTech simply need a lecturer to show up and teach them, while engineering students need a lecturer, plus engineering labs and high-tech equipment. So how on Earth does widening the scope of courses offered to include cheaper courses that attract greater student fees, represent an inefficient use of resources?

As a UTech graduate, I can say emphatically that there has been a continuous call from students for the refurbishment of labs, and the provision of better technological equipment. These complaints are primarily wielded by science students.

But, maybe UTech can bite its lip and focus less on profits and more on fulfilling the so-called mandate that the editorial has tried to brand it with. Let’s see. Of all publicly funded universities, UTech is given the least amount of overall government funding per student, notwithstanding being the supposed ‘national university’, established by an act of the Jamaican Parliament.

The March 4, 2021 The Gleaner headline, “UWI to get triple UTech’s funding’, highlights that UTech was slated to receive a government subvention of $2.9 billion for the 2021-2022 academic year. As stated before, the university’s per capita funding is less than that being given to some high schools. For the 2020-2021 academic year, for example, according to the Reform of Education in Jamaica, 2021 Report, UTech received $148,760 per student. Technical high schools were receiving a few thousand dollars more per student.

So, with high-school level funding, a reasonable expectation would be … a high school. Yet the expectation is a world-class technology university. For such a vision to ever materialise, the government would perhaps have to provide three times its current subvention. The question is, will it ever?

But, now that the editorial brings it up, UTech should now consider a name change. The government has truly not provided the funding for a University of Technology, which costs more than $2.9 billion annually.

So, I imagine that UTech functions like a ‘general’ university, as suggested in the editorial, by offering courses in all kinds of disciplines, perhaps because that is what is financially feasible. And this must be so horrible, because students will actually have more options regarding where they want to study.

So, why isn’t there a greater push for a well-funded tertiary sector? The truth is, many persons feel it is already well-funded. There is a widespread notion that The University of the West Indies (UWI) is Jamaica’s ‘main’ university and that all other universities simply play supporting roles within the tertiary landscape. Because UWI already receives the lion-share of tertiary education funding, there is no urgency to advocate for increased tertiary funding. The really problematic assertion made through the editorial’s omission of relevant facts, is that UTech should stay in its lane and not venture out into the realm of social sciences, business and other non-STEM areas. In other words, UTech is not the country’s main university and should keep that in mind.

This mindset, fuelled by age-old bias, has only worked to the detriment of tertiary education in Jamaica. And, the argument it produces, which unfortunately is mostly repeated within supposedly educated circles, can be too easily debunked.

Further, there is an unfounded notion that there is an overflowing demand for STEM skills that is not being fulfilled. There is no shortage of engineers, architects, programmers and other STEM professionals. Rather, there is a shortage of jobs in these fields. The suggestion that somehow, the country needs to churn out more persons qualified in these areas to satisfy some kind of unfulfilled demand, is utterly baseless. On the other hand, the business, communication and other non-STEM sectors are bustling with competition.

Perhaps, what is true is that ‘trade’ skills, which are usually not developed at the university level, are in demand. Since UTech is a university, it does not offer training in these types of courses. But, something tells me a few persons forgot that UTech is, in actuality, a university.