Michael Abrahams | Boy with the rocks 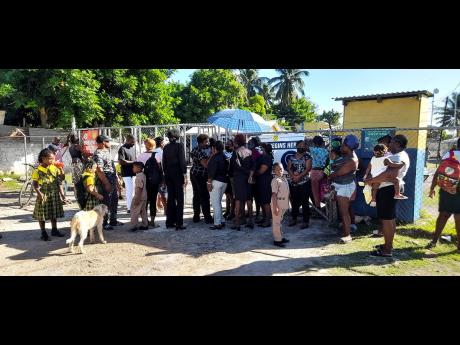 Contributed
Teachers of Homestead Primary and Infant School in Spanish Town are dressed in black as they are joined by parents during a sit-out at the school.

The video was simultaneously bizarre and disturbing. It was recorded at Homestead Primary and Infant School and showed a grade-three student repeatedly picking up rocks off the ground, walking up to a classroom, and throwing them in the room through the door or a window. During his rampage, a teacher was seen standing outside the classroom. Inexplicably, she made no attempt to restrain the child, but was seen recording his attacks on her cell phone as he repeatedly placed his classmates in harm’s way.

Not surprisingly, the video made the rounds on social media and has been the subject of many conversations in that and other spaces. The boy’s behaviour was inappropriate and should not be tolerated, but the behaviour of others, both at the scene and offering their opinions publicly, is probably even greater cause for concern.

First, the person recording the video did a great job documenting the child’s errant behaviour, and the teacher was intent on doing the same. However, at no point did either of these persons attempt to restrain the child, even though his behaviour had the potential to hurt others. Indeed, according to a media report, eight students and a teacher were injured during the attack.

Then there is the sharing of such videos on social media platforms. Some defend sharing the video of the boy, stating that sharing it enables the relevant authorities to know what is going on. Sending it to the authorities would indeed be appropriate. But putting it on blast on social media platforms has the potential to do more harm than good to this child. He is a minor, and his face is exposed, making him recognizable. Once these videos are shared, they will likely exist in cyberspace for the remainder of his life, as well as the judgemental comments hurling abuse at him and threatening violence. For example, referring to the incident, a man commenting on my Facebook page stated that the boy “cannot be helped”, and offered to administer gramoxone, a highly toxic herbicide, ingestion of which is usually fatal, to the boy. And the comment was liked by a woman who read it. The child already seems tormented, and being exposed to these comments could literally make him suicidal. Also, other children could use the videos and posts to taunt and bully him.

It is easy to judge this child, but it would be appropriate to examine the environment in which he lives. When we do, we will see that he is exposed to dysfunction at several locations. First, there are issues at home. During a radio interview, the boy’s father squarely laid the blame for his son’s aggressive behaviour at the feet of his mother, who he claims undermines his efforts to discipline his son and encourages the child to retaliate violently against those who trouble him. We have not heard the mother’s side of the story, but whatever her take is, the fact remains that there is disharmony in that household.

Second, there appears to be a toxic environment at the school. The teachers and the principal have been at loggerheads for some time, and following this latest incident, they staged a protest. Some have accused the principal, who in 2020 was involved in a brawl with a grade-six student, of not acting in the best interest of her teaching staff, and of being rude and disrespectful to the teachers. Based on what was observed in the video, with a teacher standing by and allowing the boy to injure other students, the problem is not only with the principal.

Third, the child lives in a turbulent and violent community. There have been repeated episodes of violence in Homestead this year. In April 2022, a dressmaker was killed, and her husband and her son injured when gunmen invaded their home while they slept and opened fire. The gunmen also attempted to set a house and another property on fire. These attacks came on the heels of a shooting incident in the community two days earlier. On October 14, a woman was shot and killed, and her eight-year-old daughter was wounded. Almost one month later, on November 10, there was a fatal shooting at an illegal party, and on November 13, a man was fatally shot by gunmen at his home. And during the above-mentioned teachers’ protest, a newspaper reporter and a videographer who went to cover the event were physically assaulted by a member of the community, who also damaged the videographer’s equipment.

Thankfully, the relevant authorities, Child Protection and Family Services Agency and Office of the Children’s Advocate, have become involved. An investigation has been launched into the incident at the school, and the boy and his family are getting help.

As for those persons who, after watching the video, were quick to recommend beating the boy, they need to understand that there are multiple issues at play here. The child, as mentioned above, is chronically exposed to numerous dysfunctional environments. We did not see the incident that triggered his behaviour in the video. We also do not know which other issues this child may be facing, such as mental disorders like attention deficit hyperactivity disorder, depression, anxiety, bipolar disorder, personality disorders or being on the autism spectrum. The go-to method of resorting to corporal punishment to curb unruly children is likely to do more harm than good, especially in a situation like this.

Should the child be disciplined and taught that there are consequences for behaviour like that displayed in the video? Absolutely. But in executing disciplinary measures, we must first try to understand the context in which such behaviour occurs if we are to act in the best interest of our children.