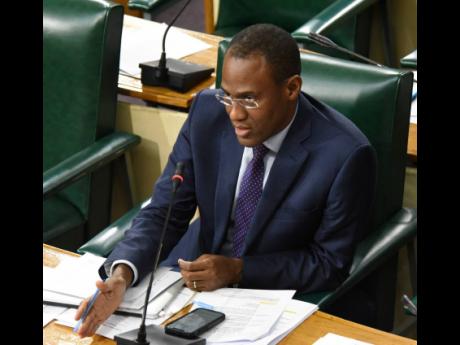 We see in Minister Clarke’s proposal an opening for an assault against Jamaica’s crisis of urban decay, and the social dysfunction and the criminality it helps to breed.

Judging by how he has teased the idea, Nigel Clarke’s proposed tax incentives for US$1 billion minimum investments will be more lucrative than anything now on the books for any sector of the Jamaican economy.

If our interpretation of the finance minister’s signal is correct, we suggest that the new legislation also apply to urban renewal projects, to provide fiscal relief beyond what is currently available.

Addressing an investment conference in Montego Bay last week, Dr Clarke announced his intention to amend the law which allows him to designate certain investments of either large-scale projects or approved pioneer industries, to which he can give tax breaks, including on income, duties, levies or imposts. Such projects must be consistent with the Government’s strategic priorities.

Precisely what incentives are allowed, however, is not set out in the 2013 law, although a project cannot be approved if it will push cumulative tax expenditure in the year of its approval to above 0.25 per cent of the previous year’s GDP.

The finance minister has promised far more transparency in the new regime – whose regulations will establish clear criteria for the incentives and what they will be – “because what we are going to be giving up will be so significant”.

“... The Act requires that ... we lay it (the entitlements) out in Parliament so everybody is aware, and we count the cost,” the finance minister said.

We hope that Dr Clarke’s optimism that his incentives will entice greater levels of capital investment – domestic and foreign – than Jamaica’s economy has seen in recent years is vindicated. Indeed, while foreign direct investment (FDI) was drafting southwards before, from a peak of US$928 million in 2016, it understandably tumbled during the pandemic years – to US$265 million in 2020, a 60 per cent drop from the previous year’s US$665 million. Inflows inched up last year to US$321 million.

SECTORS TO BE TARGETED

Minister Clarke has not disclosed any sectors targeted for investment. Neither has he declared any preferences with regard to who brings the capital. We expect him, and the Holness administration generally, to be catholic on those scores.

However, Jamaica’s underperformance in education and the economy’s low skill levels – nearly 70 per cent of the workers have no training for the jobs they do – will probably limit any rush to high-tech sectors. Which makes education one of the sectors policymakers, if possible, ought to coax big capital to enter. Tourism and agro-industries are others.

However, we see in Minister Clarke’s proposal an opening for an assault against Jamaica’s crisis of urban decay, and the social dysfunction and the criminality it helps to breed. And that can happen even as investors get returns on their capital.

Nearly 57 per cent of Jamaicans live in urban centres, large swathes of which are decayed and blighted communities in the heart of the cities and towns, or their near periphery. About a third of citizens, around 900,000 people, squat or have their homes in informal settlements – over 500 of them. Many occupy tenements. Many of these communities have a reputation for crime and violence and are largely associated with the bulk of the 1,400 murders committed annually.

The response to urban blight, and the housing shortage it helps to spawn, has been the development of suburban communities – greenfield projects that often encroach on the island’s limited arable lands – including bits which the National Environment and Planning Agency deem to be the island’s “most fertile A1 soil”. Yet, the majority of Jamaicans cannot afford these homes, even with subsidised mortgages from the National Housing Trust (NHT), the State agency funded by payroll taxes.

At the same time, decayed urban communities which have basic infrastructure and are close to critical services are ripe for redevelopment. Yet, little has happened despite relatively generous tax relief from redeveloped properties in designated improvement districts.

Part of the problem, we suspect, is the failure of Jamaica’s governments to make urban renewal a core policy undertaking that is aggressively pursued. Urban renewal projects, therefore, have been primarily small-scale, mostly individual efforts, instead of wide-scale undertakings with major outlays of capital.

With Dr Clarke’s proposed investment law, the minimum capital required to qualify for fiscal incentive is around J$155 billion – a level of outlay that should make it feasible to over, say, a five- to 10-year horizon, redevelop earmarked sections of Kingston and St Andrew or other towns. Indeed, it could provide a basis for the creation of consortiums of property owners (including community residents) and developers in business or city improvement districts for public-private sector partnerships that leverage the resources that reside in agencies like the NHT.

If they were creative about it, arrangements similar to what exist in many jurisdictions – such as Johannesburg, South Africa – that cede some of a redeveloped district’s management functions to the consortium, could be explored.

This is an idea that could perhaps be pursued within the framework of the Jamaica Chamber of Commerce’s recently reprised efforts to lead the renewal of parts of the business district in downtown Kingston.