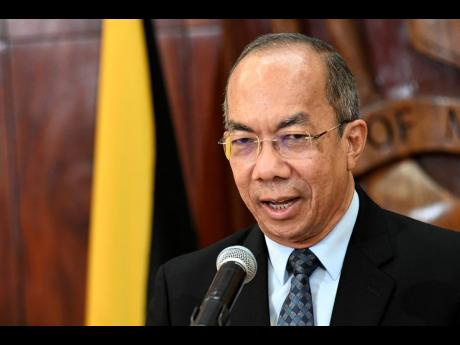 In my last article on Plan Secure Jamaica, published Sunday, January 8, three strategic principles which the Government is currently pursuing in its fight against the country’s crime monster were clearly articulated. These principles are:

1) Strengthening of the security forces;

2) Social transformation of challenged and vulnerable communities; and

However, in this article, I wish to focus on the transformation programme that the Government has been executing to strengthen the Jamaica Constabulary Force. This will not only apprise the public of the scope of this bold transformation, but also provide details on the things that have already been done and those that are currently being pursued. These activities entail the full gamut of infrastructural, technological, structural and human resource developments within the Force.

Over the past five years, the Government has been executing its Rebuild, Overhaul and Construct initiative dubbed “Project ROC”, which is geared towards the improvement of police facilities islandwide. This initiative was implemented after an independent engineering survey was conducted of the 213 police facilities. The survey graded the facilities as ‘Tier 1’ (needing minor repairs), ‘Tier 2’ (needing major repairs) and ‘Tier 3’ (irreparable and requiring replacement). The programme of work was then planned and executed accordingly.

Over this period, the Ministry of National Security in collaboration with NHT and JSIF have rehabilitated, overhauled or constructed 130 police facilities. This includes 11 fit-for-purpose police stations, which were either newly constructed or extensively rehabilitated with the appropriate design features embedded, such as proper reception areas and private interview rooms.

For many decades, the development of the JCF has been neglected. However, I would like to point out the technological revolution that is currently taking place within the Force, led by officers of the Force and the ministry. It involves the following:

• Upgrading of the P25 Radio Network, which is now complete and we are currently building out towers to close ‘dead spots’, which have existed since independence;

• Upgrading of the Criminal Records Office and the Fingerprint System for better customer service;

• Digitisation of all records of the police force, which encompasses the replacement of the “big books” at stations with an electronic Station Records Management System. The development of this thrust to cover all stations is well under way and by the end of FY 2022/23 it should be in all divisional headquarters;

• Putting in place an efficient and effective Asset Management System;

• Continued expansion of the JamaicaEye Programme, which now has 860 cameras installed, with an additional 300 cameras to be installed by the end of FY 2023/24. We are now looking at how we can rapidly build out the rest of the island;

• The addition of a Fleet Management System to police operational vehicles. Over 1,000 vehicles are currently being tracked on the System, which allows commanders to monitor operations;

• The upgrading of the Police Emergency Communication Centre from a C2 level to a fully developed C5 (Command, Control, Computers, Communications and Cyber) facility;

• The development of a new end-to-end digitised Traffic Ticket Management System (TTMS), which will become operational at the beginning of next month.

As we seek to ensure tat the JCF is able to deliver smart, modern policing services to the public, we are equipping members with cutting-edge technology. Some of these are:

• Smart Check application (both in service units and on handheld devices) to query databases whilst operating in the field;

• Digital handbook “The JCF’s Offences, Points to Prove and Authorities Handbook, 2021” to support the effective prosecution of offences; and

• Personal accoutrements such as ballistic vests, helmets and less-lethal weapons.

Every year since FY 2016/17, fit-for-purpose police vehicles have been bought on a routine basis. These vehicles are outfitted with the full suite of modern policing equipment and systems, which has never been done before in the history of the JCF. Since that time, 1,368 vehicles have been procured at a cost of approximately J$4.3 billion, which include more than 150 bikes for the Quick Response (QR) teams.

Over the past five years, a number of structural and human resource developments have taken place within the Force. These include:

• The building out of Quick Response teams, which are particularly effective in urban areas;

• Establishment of a dedicated Welfare Department;

• Establishment of a Technology Branch, which is responsible for the technology management and digitisation programme;

• Development of a full logistics and planning portfolio;

• Rehabilitation and acquisition of additional training facilities, namely: Harman Barracks, Tranquility Bay and Camp Verley. This has allowed the Force to add 800 to 1,000 officers to its numbers each year;

• Specialised courses to upgrade the skill sets of the workforce;

• Integrity vetting of all Force applicants and candidates for promotion and sensitive postings;

• Revamping of the Legal Affairs Department with a cadre of experienced civilian lawyers;

• The work of IPROB to promote integrity and ethical and professional behaviour among members of the Force.

And so, as we continue to execute on our plans to strengthen the JCF, we are confident that a police force capable of carrying out its mission effectively in the technological age will ultimately emerge. This would be the greatest signal of this transformation process.

- Dr Horace Chang is Jamaica’s deputy prime minister and minister of national security. He is also a member of parliament for North West St James and a medical doctor by profession. Send feedback to securityminister@mns.gov.jm