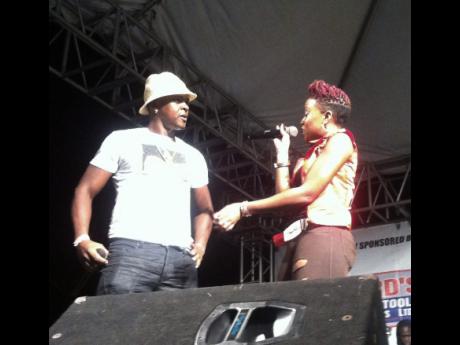 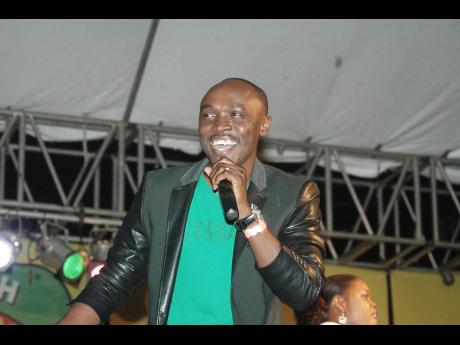 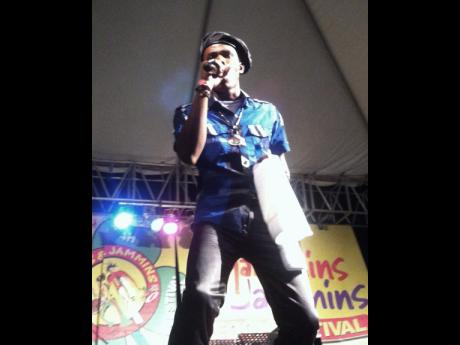 Despite attracting no more than a handful of patrons, dancehall star Mr Vegas, 2014 'Digicel Rising Stars' winner T-Rizzy, and gospel sensation Kevin Downswell all combined to make the rain-drenched Heroes Day staging of the 4-H Nyammins and Jammins Food Festival in Montego Bay a fun-filled affair.

Mr Vegas hit centre stage at 10 p.m., belting out the compelling lyrics of I Am Blessed. He quickly increased the tempo, sending the patrons, who were all huddled in the VIP area, into a dancing mood with songs like Gallis, Tek Weh Yuhself and Hands Up.

The lyrical Mr Vegas then nonchalantly showed off his versatility, delighting with superb cover versions of Beenie Man's Who Am I? and Tanto Metro and Devonte's Everyone Falls in Love.

He then returned to his own catalogue, reeling of mega hits like Heads High and Jacket, which he blended with Alton Ellis' Breaking Up and You Make Me Happy.

The artiste then hit a delightful purple patch with his own Sweet Love Story in Do You Know and Sweet Jamaica, in which he did the section of the song done by ace deejay Josey Wales in dazzling style, showing he was quite competent in the hardcore deejay style.

Mr Vegas' performance reached fever pitch when he and Latty J went toe-to-toe in a lyrical clash, reminiscent of the heydays of Papa San and Lady G. Their classy rendition of Woman Rule, which was witty, energetic and chock-full of positive flavour, was well received.

T-Rizzy, who is now preparing to move his career forward in the aftermath of his 'Rising Stars' success, got a lot of love from patrons, especially the females, who seemed to get into a tizzy whenever his voice came at them through the powerful column of speaker boxes.

The Trelawny native started off his set in quite a soulful manner, belting out I Give Thee Thanks, and then went into overdrive, reeling off songs like Hero and Fall in Love, which he blended with witty social commentary with consummate ease, much to the delight of the fully engaged gathering.

It was all screams as T-Rizzy evoked memories of his 'Rising Stars' performances, with renditions of Anything For Love, Caribbean Queen, the compelling Delilah, and one of his own compositions titled One of Kind Love. The medley that followed, which featured snippets of old Jamaica ballads, left no doubt that the talented young singer is ready to go places.

Gospel singer Kevin Downswell was a bundle of energy and charisma, and he showed that gospel artistes could be just as 'vibsy' as their secular counterparts. With his three backup singers adding solid vocal power to the mix, the singer started off with Jesus Forever and never looked back.

It was like a church in full gospel flow, as Downswell delivered lustily with songs like Save Me, It's Raining, Running and Moving Forward, without skipping a beat, as the appreciative audience happily performed choir duties for him.

The excitement intensified as Downswell all but brought the house down, hitting the home straight with rich renditions of Christian Soldiers, Praise Him, He Is Coming, My Creator and You Make Me Stronger.

While the reggae outfit RDX failed to show, lesser known acts like Tribe of Judah, Samantha Salmon, Janiel Gordon, Q Kid and Lyrical, Mind Reader and Dustville Dancers used the opportunity to advertise their talent and managed to gain some amount of traction.