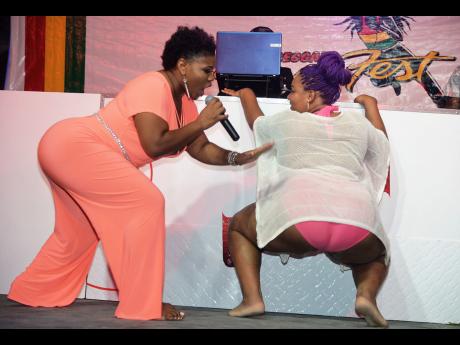 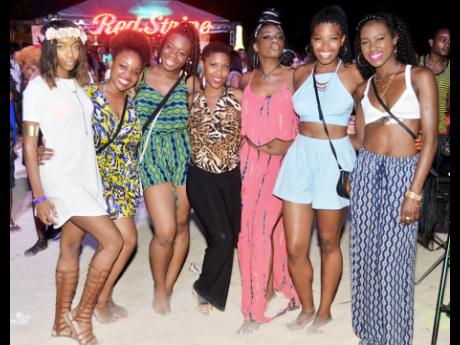 Some of the ladies who turned out for Beachfest. 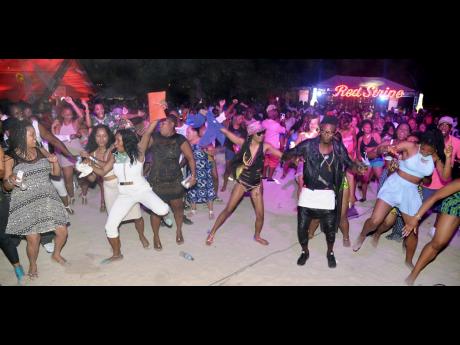 Mark Titus
Part of the audience at Sunday's Beachfest, the opening event for Reggae Sumfest 2015.
1
2
3

Radio personality Miss Kitty was the perfect host as the 2015 staging of Reggae Sumfest got under way with Beachfest at the Aqua Sol Theme Park, Montego Bay, St James, on Sunday.

Many patrons turned out early, seemingly seeking to get the full value for their money. There was ample parking and the presence of a large contingent of members of the Jamaica Constabulary Force (JCF) offered an assurance of security.

The venue also had a food court, which offered a wide range of Jamaican dishes, while craft vendors ensured that party lovers visiting Jamaica's tourism capital from overseas had their pick of souvenirs to take home.

With her usual antics and social commentary, Miss Kitty kept the jam-packed venue buzzing, as patrons partied up a storm to the musical juggling of renowned selectors and sound systems such as Black Chiney, Chromatic, ZJ Liquid, Crazy Neil, Mario C, and Bishop Escobar.

No one was left out, as persons from throughout the Caribbean, Europe, and North America partied the night away. Persons celebrating birthdays, wedding anniversaries and the winner of a dance-off were rewarded with tickets to the Sumfest main shows later this week.

The selectors were evidently at home with the large audience, combining to dish out a menu of musical offerings from many genres of music, as patrons enjoyed themselves to the fullest.

However, ZJ Liquid ensured that all in attendance understood that this was his home turf, as the Cornwall College old boy had the entire venue, with skimpily-clad females, following his instructions.

Having whet the appetites of patrons, anticipation is now high for the All-White Party tonight at Pier One, before the main course of Dancehall Explosion on Thursday and Show Time and Star Time on Friday and Saturday, respectively, at the Catherine Hall Entertainment Complex. Among the performers slated to perform are Jennifer Hudson, Common, and Yazz, as well as the local acts such as Capleton, Gully Bop, I- Octane, Lady Saw, and Beenie Man.