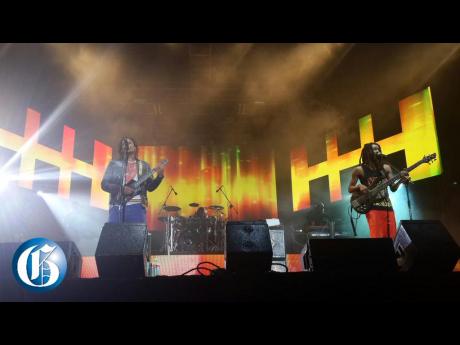 It was their first ever performance at the summer reggae festival, but one would not know that by their professional approach and solid, authentic reggae sound, which clearly resonated with the patrons.

Their reputation is well known across Europe, and this performance will no doubt heighten their visibility locally, especially after delivering the impactful hit Judgement Day.

"On Judgement Day, I'll be playing music for the rebels." - @Ragingfyah #Sumfest2015 pic.twitter.com/NukdlRpxXd

The group also dropped Jah Glory and Running Away among several other big songs before exiting to a warm round of applause.

They told The Gleaner, this was just a precursor to their pending European tour, for which they will leave the island on August 5 for Poland and Austria, among other countries.

On top of all that, Raging Fyah is keeping plans for a new album top secret, hinting however, that it will be for a major reggae label.

“We just want to keep producing authentic roots, rock reggae,” the group said in an interview.

Meanwhile, cabaret singer Kareen enhanced her portfolio with a decent set, with the main feature being well rehearsed dancers. Before her, Dominican reggae act Oriel laid the foundation for the night.

‎myReport Assignment: Send your photos, stories and videos from Reggae Sumfest 2015 and see them online. It's easy! Just log on to www.jamaica-gleaner.com/myReport, sign up and send today!