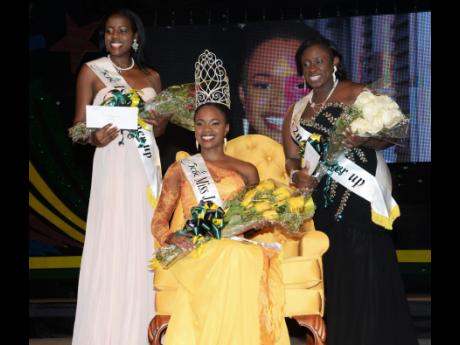 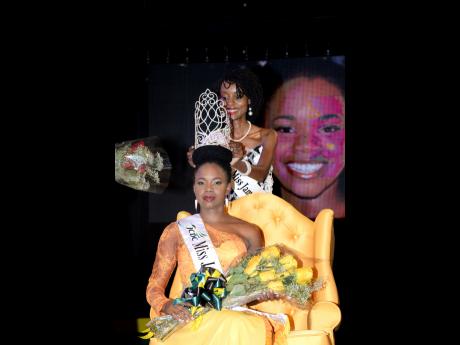 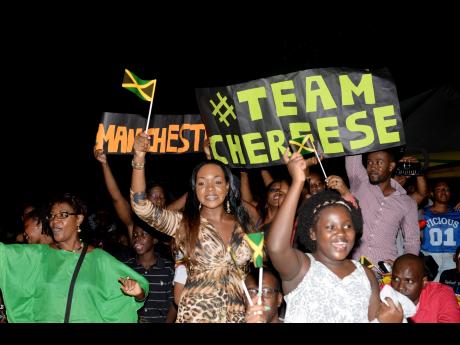 Jermaine Barnaby
Patrons made it clear who their favourite was. 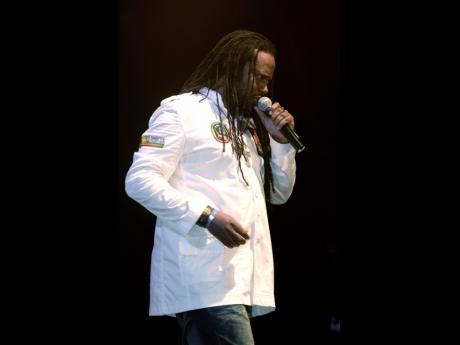 There can only be one winner in any pageant, and deservedly, Chereese Ricketts, Miss Manchester, was adjudged to be number one at the Jamaica Cultural Development Commission (JCDC) Miss Jamaica Festival Queen 2015 Grand Coronation Show over the weekend. Miss St James, Issia Thelwell, was declared the first runner-up to the Queen and Miss Kingston and St Andrew, Michelle Thomas, her second runner-up.

Guided by the national theme, Proud and Free Jamaica 53, coronation 2015 was held on Saturday; Emancipation Day, at the Independence Village, created at the Ranny Williams Centre.

Except for a few brief periods of technical glitches and the absence of a fanfare opening dance from the contestants, the show was of a high standard. The use of panels of lights for wings and a large screen placed up stage centre gave vibrancy to the main ambiance.

It was not explained why the lights went out briefly during the contestants' 'Parade in Evening Wear', just before they were serenaded by Harold Davis and Friends. But resident Festival Queen choreographer, Barbara McDaniel, clarified the absence of the anticipated opening dance from the contestants. She "came in late this time, and they [JCDC] wanted a difference this year".

And so the talented and energetic Wolmer's Dance Troupe, wearing jeans shorts and white T-shirts, performed the opening number. But the fan-based audience only came to full life when the 13 parish queens walked onto the stage.

Individually, each contestant, adorned in jeans and bandanna, walked to the microphone placed downstage centre and introduced herself.

Their next appearance came in the talent segment. The pieces, that span the tragic to the comedic elements of Jamaica today, were delivered in story telling, poetry, songs and a dance.

Tiffany Copes, Miss Portland, opened the account. It was a mundane piece titled, Jamaica Nice Eh, that was soon forgotten when Lazan Zina Frazer, Miss St Mary, arrived at the party. Her serving of a well-written and justly presented, Free it Up, made a strong case for ganja.

"Two ounce is not enough," she reverberated, as she traversed the stage, attired in the appropriate costumes and brandishing the symbolic flag.

At the end of the segment, her strongest challenger, Miss Westmoreland, Anna-Kaye Williams, with her song, Proud Jamaican, was not good enough, according to the judges.

Frazer was awarded the Best Performer, when the sectional winners were announced. The crowd concurred. Also receiving sectional prizes were Kimberly Morant - Miss Hanover, for Most Congenial; Kameika Coleman - Miss St Catherine, for Most Poised; and Ricketts - Miss Manchester, for Most Active in Community and the Most Culturally Aware. And the writing was on the wall.

Not surprising, Ricketts was one of the top five, along with Thelwell, Thomas, Coleman and Abigail Stewart - Miss St Thomas. With abated breath, the audience hung unto every question - and they ranged from helping the youths, migration of athletes and the development of parish. Each answer, especially Rickets', was keenly listened to and digested. On a whole, all the responses were good.

So guest performer Duane Stephenson, provided the much needed breather by going to a Little Cottage in Negril, and singing Jimmy Cliff's Many Rivers to Cross. He returned to deliver Real Ghetto Pain for his encore.

Then it was time to announce the top three. Unfortunately for Thomas, the applause was limited to her cheering party. Thus master of ceremonies, Terri-Karelle Reid, who along with Adrian Brown, did a marvellous job, reminded the audience that Thomas also gave a good performance in the talent segment. Thelwell, however, had a better response. But the most favourable came when Ricketts was announced the winner of the competition.

As the crowd now harbouring mixed feelings made their exit, it was a contented Chereese Ricketts who spoke to The Gleaner.

"I am happy that my hard work has brought me to this place, and now, I am just really looking forward to what the next step is. And I'm really beaming to make a difference as Jamaica Festival Queen."

And while she looks forward to the next step in her journey, the University of Technology-trained architectural designer has nothing but positive words for the competition. She would definitely recommend the pageant to other young women.

"Win, loose or draw, it pulls you out of your shell. It really increases your confidence, your sense of self, your sense of community, your sense of nation. It's an absolute excellent, excellent competition, and I intend to be closely related to it for the rest of my life."