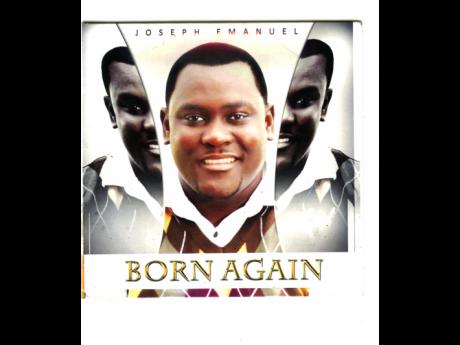 Contributed
A smiling Joseph Emanuel on the front cover of 'Born Again'. 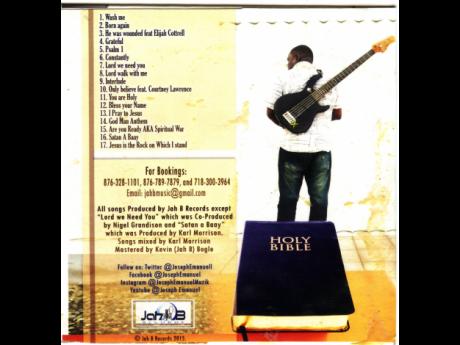 Joseph Emanuel's 17-track Christian-gospel CD, Born Again, breathes sincerity and its attendant enthusiasm throughout. Within its first two tracks the album also shows the variation in pace and delivery which mark the set.

Emanuel opens singing the general request for forgiveness, in English, on a slower reggae rhythm then, with Born Again, quickens the pace, going personal and detailed in his testimony of transgression and return to the fold.

Using a mixture of nation language and standard English, he also shows hints of deejaying, along with singing, on Born Again - the former blooms fully close to the end of the set on tracks 13 and 14. The former, I Pray to Jesus, is a laid-back rub-a-dub boomshot remake and rewording of Yellowman's I'm Getting Married ("So I pray to Jesus in the morning/Hear the prayer warriors them praying/Jesus is my saviour/My one and only saviour/So make we praise the Lord all the time/Hear me now/So don't you tink I'm crazy/Cause a Jesus Christ did save me.").

It is followed by a dancehall track on a rhythm that would not be out of place coming from a big sound in that mid-morning period when the pace is building towards the closing frenzy. Emanuel deejays his plea for protection competently, with "dis a de God Man antem/Big up de God man dem/Dis a de God woman antem/Big up de God woman dem/So faada please cova my head/Cause de wicked waan see we dead/Waan see we dead an bury long time."

In between, after the standard English spoken work, Interlude, (track 9) there are the slow praise and worship tracks - Only Believe (delivered acoustic, with guitar), You Are Holy and Bless Your Name, preceding I Pray to Jesus. Then in the earlier going, at track 5 is Psalm 1, an excellent combination of singing and deejaying, English and nation language, dominated musically by the guitar.

As striking as the changes of format, pace and language are, though, they lead to the thought that some economy of output could have been employed. For while the 17 tracks are a statement of well-merited artistic confidence, there could - and should - have been fewer tracks without any loss of impact. Three slower praise and worship songs on a trot are unnecessary. Similarly, the closing uptempo trio of Are You Ready (aka Spiritual War), Satan A Baa and Jesus is The Rock could have been trimmed.

As an entire project, in Born Again, Joseph Emanuel serves up enough material for almost two albums in one. With some tracks culled, he would still have had the foundation of a good follow-up set. But such is the enthusiasm of rebirth, and maybe he is confident that there is much more creativity springing from the spiritual well.

As strong a set as it is, the CD has its shortcomings. For example, in the lower notes of You Are Holy, Emanuel's vocals are less than stellar - the difference between his handling of lower and higher notes shows on Lord We Need You.

As much as the respect to the lady of his life is appreciated on the reggae love song Constantly (a welcome inclusion on a gospel set), the line "dash whe the girl I had before" is jarring and out of character for the performer's persona and the album's tone.

Lyrically, Emmanuel is more than competent. The strength of his personal testimony of falling off the straight and narrow in the title track ("Me smoke weed and cigarette/Very maaga me did get/Til me Mommy and me Daddy start fret") is not to be denied. And Elijah comes up with some good lines in his description of the crucifixion on He Was Wounded ("Blessed be the Holy Ghost/Dis a no duppy story').

Born Again is a strong set, varied in Emanuel's delivery and the music fusing with the vocals which, if reduced numerically from 17 tracks, would not have been diminished artistically.

3. He Was Wounded (feat Elijah Cottrel)

15. Are You Ready (aka Spiritual War)

17. Jesus is the Rock on Which I Stand