Of drums, spirituality and spirits 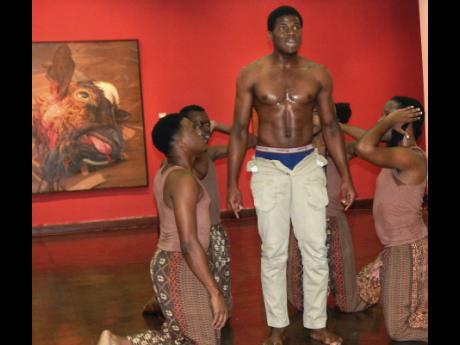 Michael Reckord
Quilt's males in 'Noises in My Blood'. 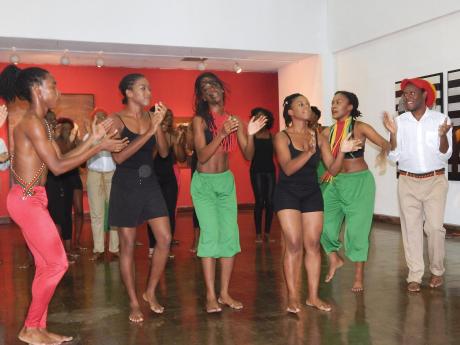 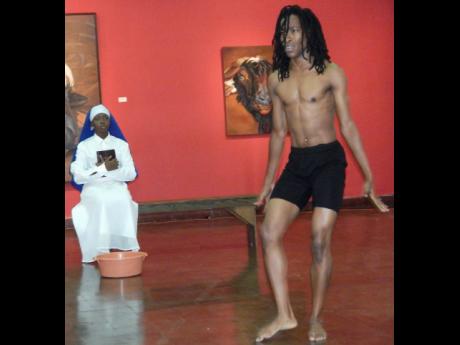 Michael Reckord
The Quilt dance 'Take Me to the Church'. 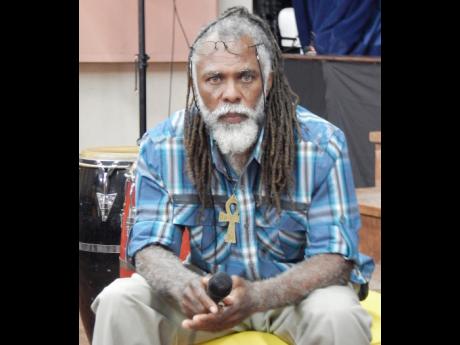 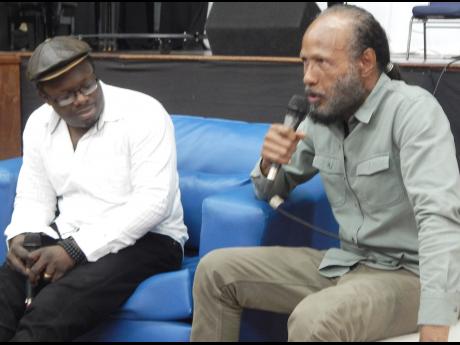 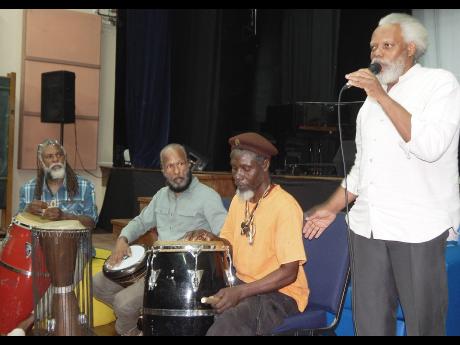 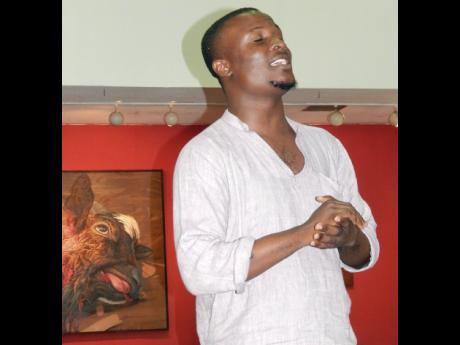 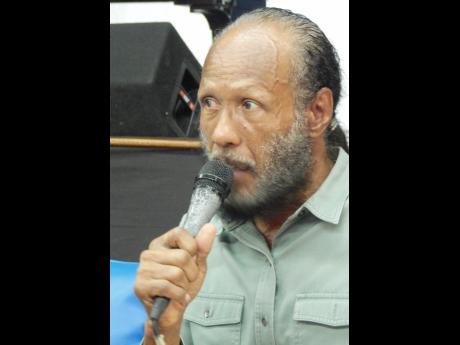 Free public entertainment in the Corporate Area includes gems like the Creative Conversations sessions at the Edna Manley College of the Visual and Performing Arts (EMCVPA), offered thrice per semester, and the National Gallery of Jamaica's monthly Last Sundays functions.

Last Thursday, Creative Conversations was about drumming, while on Sunday, the National Gallery presented a Quilt Performing Arts Company show. Both events provided food for thought as well as artistic delight.

The college's Vera Moody Concert Hall in the School of Music was the venue for the drumming 'conversation' - mostly talk, but with a powerful impromptu drumming set to close things off. The drummers were Congo Billy (Lawrence), Carrot Jarrett and Calvin Mitchell, all well-known.

Guided by moderator Marvin George, a lecturer at the School of Drama, panellists Lawrence and Jarrett had an audience of mainly staff and students of the EMCVPA. They spoke a lot about their drumming history, but it was their frequent references to the spirituality of drumming that really held our interest.

A student asked: "Can drumming evoke the spirits?"

Lawrence answered: "As far as I know, yes."

He went on: "If you go to a kumina session you see very strange things, like people climbing trees backways."

His answer led to a fascinating discussion.

"There's a spirituality to the drums. It's like your heartbeat," Lawrence said.

He spoke of his experience at an all-night kumina session in St Thomas.

"I was there listening and watching the ritual which a master drummer, James, was keeping in his yard," Lawrence said. "If you really want to play the drum you have to dance. It's a part of the rhythms, so I was there dancing. When I left St Thomas and went home, lying in my bed, I could still hear the rhythms clearly in my head and I realised I had got initiated.

"Poco [pukkumina] was my introduction to drumming," said Jarrett. He reminisced about drumming in a closed session with three women, one of whom started to "spin like a gig", causing the other women to become fearful.

"Playing the drum comes with enormous responsibility," Jarrett said. "Believe it. I was in charge of the people in that room. I was responsible for getting that woman to be happy with what she was doing."

He started playing a more soothing rhythm until the woman became calm.

"She got up and smiled and said thanks. Up to now, she can't tell you what she went through. It was a moment in history," Jarrett said.

He said his father, Don Jarrett, was a drummer and his brothers are also drummers, arguing that drumming is in the family's DNA.

"The drum makes us become who we are. I chose to play the drum that chose me to play it," Jarrett said.

He said the drum was the first musical instrument and the other instruments have features of a drum, but will never replace it. Notes can be played on the drum, he pointed out, and "you can line up a set of drums and play the National Anthem".

Prodded by George, Jarrett spoke about his "liberating experiences" as a member of the celebrated Third World ensemble. His reflections were augmented by Michael 'Ibo' Cooper, formerly of the group, who now lectures at the School of Music.

Lawrence said he was greatly influenced by Third World's music (as well as the music of Michael Jackson and The Stylistics, among others). He wrote his first song at 14 years old and had to sing when he joined his first band, playing for Jimmy Cliff.

"A lot of singers are in my family," Lawrence said.

Reflecting on his years as a drummer with the National Dance Theatre Company (NDTC), Lawrence said drummers were sometimes given a chance to create a rhythm or pattern to fit a dance. Later, Marjorie Whylie, the then musical director, would choose an appropriate song.

In answer to a question by George, both drummers said they are okay with sampling of their music by other musicians and use of the drum machine. The latter enhances their drumming, they said.

The session culminated with a well-received drumming set by Lawrence, Jarrett and Mitchell.

Quilt at the gallery

Sunday's 40-minute performance at the National Gallery by Quilt Performing Arts Company was, I learnt after the show, preparation for a bigger three-night show at the end of this month. The show comprised four pieces: 'Where is Mario?', 'Take Me to the Church', 'Noises in My Blood' and 'Move'.

The first piece had a number of young men rushing around, on and off the performance area - the National Gallery's lower hall, with paintings on the walls. The youths keep asking, "where is Mario?" Eventually, they reveal (in a dramatic poem that ends "Mista Society, mi come fi report me bredda missing") that they are looking for Mario Deane, the young man who died on Independence Day last year after being beaten in the Barnett Street lock-up in Montego Bay.

The other pieces - again combinations of dance, movement, music and dialogue - also touch on social issues. They include being black, living in a poor country, the abduction of 200 girls by Boko Haram and growing up to be a woman in any country.

Quilt was formed six years ago. The members are young, talented, very energetic, and a joy to watch.