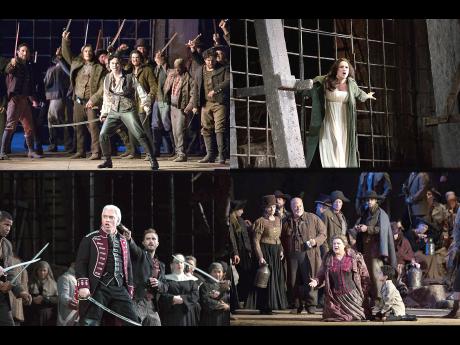 This Verdi masterpiece stars Anna Netrebko as the heroine Leonora in her Met-role debut. Dolora Zajick sings her signature role of the mysterious gypsy Azucena, with Yonghoon Lee as Manrico (making his Met-role debut) as the title character, Dmitri Hvorostovsky, as Manrico's rival, Count di Luna, and Stefan Kocan as Ferrando.

Zajick and Hvorostovsky reprise their roles, with Marco Armiliato leading all performances of David McVicar's 2009 production at the Met this season.

Tomorrow's performance of Il Trovatore will launch the 10th season of the Met's Live in HD series, when it is transmitted to more than 2,000 cinemas in 70 countries around the world, including Jamaica.

Anna Netrebko stars in Il Trovatore, following her performance as Leonora at the Berlin State Opera and the Salzburg Festival. After making her company debut in 2002, as Natasha, in the Met premiere of Prokofiev's War and Peace, the Russian soprano has sung 16 roles with the company. These include Lady Macbeth in last season's production of Verdi's Macbeth and the title role in the Met premiere of Tchaikovsky's Iolanta.

She can be seen later this season in her New York-recital debut on the Met stage in February. She will also reprise her role as Leonora at the Paris Opera and the Berlin State Opera, the title role in Puccini's Manon Lescaut, at the Vienna State Opera and Elsa in Wagner's Lohengrin at the Semperoper Dresden.

Dolora Zajick has sung the role of Azucena 48 times at the Met, the most performances ever in the role with the company. Most recently, she sang Azucena with the Houston Grand Opera and San Francisco Opera. She has sung more than 230 performances at the Met since making her company debut as Amneris in Verdi's Aida in 1989.

Zajick will be singing the mezzo-soprano role in Verdi's Requiem in Bilbao and Ulrica in Verdi's Un Ballo in Maschera at the Rome Opera later this season.

Yonghoon Lee makes his Met-role debut following performances of Manrico at the Bavarian State Opera, Lyric Opera of Chicago and at the Theater an der Wien during the Vienna Festival. He made his Met debut in the title role of Verdi's Don Carlo in 2010.

Lee's previous roles at the Met include Don Jose in Bizet's Carmen and Ismaele in Verdi's Nabucco. Later this season, the tenor will sing Turiddu in Mascagni's Cavalleria Rusticana with the company.

Dmitri Hvorostovsky has sung Count di Luna in two previous seasons at the Met, including the premiere of David McVicar's staging. He made his Met debut in 1995 as Yeletsky in Tchaikovsky's The Queen of Spades. Since then, he has sung over 170 performances with the company. These include Verdi roles such as Anckarstrom in Un Ballo in Maschera, Rodrigo in Don Carlo, the title role in Rigoletto, Germont in La Traviata and Don Carlo in Ernani.

Later this season, Hvorostovsky will sing a recital at Carnegie Hall and star as the title character in Tchaikovsky's Eugene Onegin at the Royal Opera, Covent Garden.

Stefan Kocan previously sang the role of Ferrando at the Met in 2011. He made his Met debut in 2009 as the King in Aida. Other roles at the Met have included the Grand Inquisitor in Don Carlo, Khan Konchak in Borodin's Prince Igor, Gremin in Eugene Onegin and Sparafucile in Rigoletto, a role he will reprise later this season.

Angela Meade reprises Leonora in February, a role she sang at the Met in 2013. She made her company debut in 2008 singing Elvira in Ernani. Her other Met roles have included the title roles in Donizetti's Anna Bolena, Bellini's Norma and Rossini's Armida, Alice Ford in Verdi's Falstaff and the Countess in Mozart's Le Nozze di Figaro.

Following her performances at the Met, Meade can be seen in Verdi's Requiem in Bilbao and reprising her role in Il Trovatore at the Deutsche Oper Berlin.

This opera is the first of five McVicar productions at the Met this season. The Scottish director made his Met debut, helming Il Trovatore in 2009. His other productions this season include revivals of the double bill Cavalleria Rusticana and Leoncavallo's Pagliacci, revivals of Anna Bolena and Maria Stuarda, as well as a new production of Roberto Devereux to complete the Donizetti Tudor Queens trilogy.

Verdi's first production of Il Trovatore premiered in Rome in 1853. Thirty years later, the opera premiered at the Met in its first season. The production was the company's third opera staged, after Gounod's Faust and Donizetti's Lucia di Lammermoor.

Since the opening, Il Trovatore has been staged 637 times at the company. Zinka Milanov holds the record for most performances as Leonora, having sung the role 49 times between 1937 and 1957. Giovanni Martinelli has sung the part of Manrico the most, doing 69 performances with the company between 1915 and 1945.

Notable sopranos who have sung the role of Leonora at the Met include Montserrat Caballe, Leontyne Price and Joan Sutherland. Distinguished tenors who have sung the part of Manrico include Jussi Bjorling, Enrico Caruso, Placido Domingo and Luciano Pavarotti.

Susan Graham will host the live transmission of Il Trovatore to cinemas around the world on October 3.

Tickets are now on sale for The Met Opera's 2015 - 16 Season at the box offices at Palace Cineplex and via the web at www.palaceamusement.com, with a Palace Card.