Mikeylous still getting ahead after 27 years 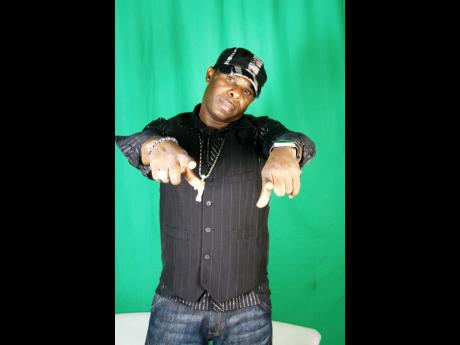 A popular DJ from in the 1980s, Mikeylous (formerly Nigger Mikey, given name Michael Grant), still boasts being current, with tracks in rotation on radio and blazing in the dancehall right now.

His latest track, the somewhat controversial Haffi Get Ahead, along with a remake of Shabba Ranks' Pay Dung Pon Eh, and Gideon, produced by G T Taylor, are among those that are keeping the veteran St Ann DJ in the limelight after 27 years in the business.

Shortly after Hurricane Gilbert in 1988, Jamaica responded positively to a song by the duo of Peter Metro and a new DJ called Nigger Mikey, sending the track Bad Min' a Kill Dem way up on the Jamaican charts.

After this phenomenal breakout, the new DJ, who would later change his name to Mikeylous because of the offensive nature of his original name among overseas industry players, scored several other hits before the turn of the century, the most popular ones being Ting Deh on the Penthouse label, Man a Wall in 1995 and Macarena Dance in 1996.

It was while he was touring Europe and reached France, in 2000, that Mikeylous realised the negative impact that his original name was having on his career. He searched for a new name and came up with Mikeylous, thanks to Junior Demus.

After changing his name to Mikeylous, the DJ scored another big hit with Sticky.

"After mi change mi name to Mikeylous, it was Sticky - it get sticky ova foreign and it sticky inna a yaad - dat was the song dat mek di people dem know me as Mikeylous," he recalled.

In the ensuing years, not much was heard from the DJ, but according to him, he was still working and his perceived absence was due in part to the lack of promotion of his music during that period.

Last year, he spent most of his time in England. This year, he is in Jamaica promoting his music in the streets.

Mikeylous' musical career also includes record production, as he has produced other artistes over the years.

His latest project is a one-drop rhythm titled Brain Washing, which features himself with the track Free Up Di Herb, and other dancehall artistes including Macka Diamond, Little Hero, Chezidek and Michael Fabulous.

For the remainder of the year, Mikeylous is expected to perform on several shows including GT Taylor's Extravaganza.

Come next year, Mikeylous hopes to enjoy another productive year.

"Fi next year, mi a 'daub' up di place with songs. It ah guh bigga an' betta next year," Mikeylous promised.