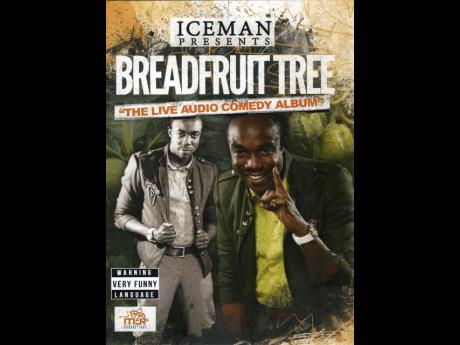 Contributed
The cover of the 'Breadfruit Tree' comedy album. 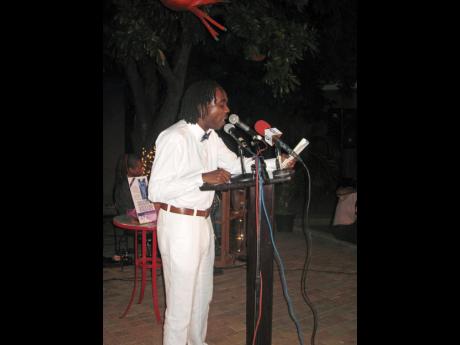 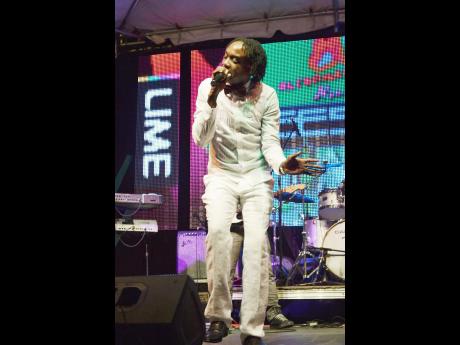 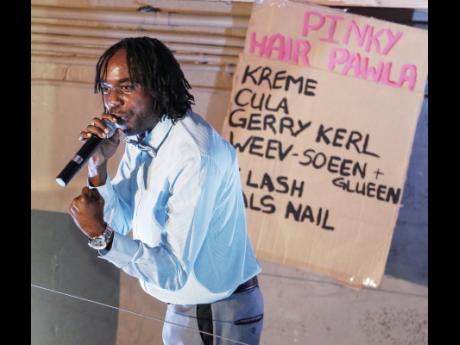 Contributed
Donald ‘Iceman’ Anderson in a comedic routine on stage.
1
2
3
4

There is actually a breadfruit tree in Donald 'Iceman' Anderson's yard. It has long been a scene and source of inspiration. Under its branches, the comedian/singer/actor and briefly radio show host has developed much food for his artistry. And, by weathering many a storm and still remaining standing, it is a living example of the roots Anderson hopes to push deeper into the fertile soil of Jamaican creativity.

So it is not by chance that he has put out Breadfruit Tree, subtitled The Live Audio Comedy Album, in collaboration with manager Donovan Watkis (who is credited as co-writer, as well as executive producer). Distribution is being done by Tuff Gong, and the album is also available on various digital platforms.

It is not his first venture into a comedy recording, but it is the first time Iceman has gone this in-depth - and relied on voice only. "We have done live recordings. These live recordings we've done before have culminated into this project. We have done things for social media, other things, but those things were audio-visual. This comedy album is literally my first offering on an album basis as it relates to the genre of comedy," Iceman said.

The album was done without an in-studio audience to gauge reaction or musicians and harmony singers who might offer feedback. "Is not a music experience. Is a comedic experience, so is you, the engineer and the resource person at the time," Iceman said. Breadfruit Tree was recorded at Rural Area Productions in Clarendon with Kevin 'Rural' White as engineer and Watkis also present.

Presenting humour without being able to use stage props or facial expression has its challenges. 'The visual assists the audience in laughing; they are seeing you being animated and everything. So when you just have the voice now, your voice has to be so animated, so engaging, so 'storytellingesque' that it draws in the audience. It almost drape up them imagination, and and you are able to evoke laughter from how you tell the story from your perspective," Iceman said.

"It is a challenge, but it is a welcome challenge. It is something that I always aspired to do. It is a daily practice to make people laugh. Comedy is not something that you can go to a college or university to learn. Is your delivery, is your perspective, is your take on life situations."

However, that does not mean that Anderson has eschewed professional training. Last Saturday, he was slated as a co-host of Water The Roots at the Edna Manley College of the Visual and Performing Arts. It is an event at which past students of the college perform to help raise funds for the institution.

Anderson was a School of Drama student from 1992 - 1995, doing a diploma in Theatre Arts. "We did acting, voice and speech, directing - not just the theatre-oriented courses, but also psychology, use of English, professionalism, drama in education, a lot of subjects that allow you to harness your skills on a technical and a performance level," Iceman said.

The School of Drama training enhanced Iceman's talent. "From I was a kid, I have been impersonating people, impersonating sounds, trying to sound like other people, talk like other people. Me used to try sing like Michael Jackson in We Are The World," Iceman said. The late Gloved Wonder's voice is not the only one from the hit song's all-star American cast of singers that Iceman took on.

"I used to do the Michael Jackson voice not too bad," Anderson said, also naming Kenny Loggins, Stevie Wonder and Willie Nelson among those he did well. He was at about 60 per cent with Bruce Springsteen's gravely vocals and says "I coulda capture the Cindy Lauper voice, but I never rehearse the falsetto that much".

He does many voices on Breadfruit Tree, including those of former Jamaica prime ministers P.J. Patterson (Perci Speech) and Edward Seaga (Eddi Rant) and former Mayor of Kingston Desmond McKenzie (The Macking Mayor). He captures the stereotypical tones of a government employee interfacing with the media in Jamaican Fire Man, and replicates a number of memorable Jamaican advertisements (including for Dragon Stout) in Remembering. Iceman is mostly himself as a passenger on the now-defunct Air Jamaica, injecting the tones of a distant (in more ways than one) pilot.

On two sides of the religious spectrum, there are Church Encounters and Rasta Reasoning, and the women should be able to relate especially well to Ladies Man Gone Wrong.

The comedy material has roots deep in Iceman's development. "A lot of comedians' material is life-based, either from what they see or what they go through. My comedy material is about me growing up, my personal experiences, my school experiences, my church experiences... . Those impersonations, like of Mr Seaga and Mr Patterson, are from years of observation, years of listening to them when my mother force me to watch the news when election a gwaan and there is nothing else to watch on TV because is just one TV station and you no have no video a you house," Iceman said.

So he has been honing voices from "single-digit years to teenager to 20s come right up."

"So to see this come to fruition is one of my dreams come true," Anderson said.