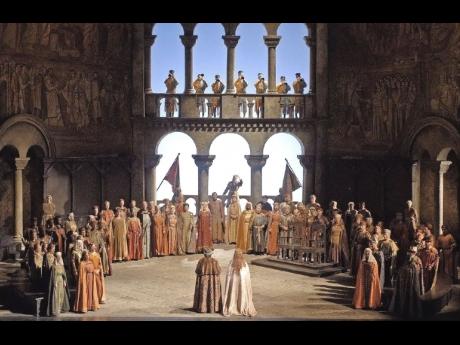 Contributed
A scene from Wagner's 'Tannhäuser'. 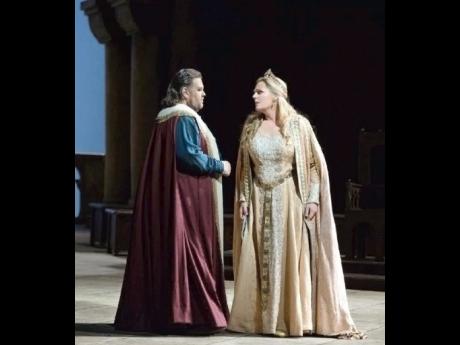 Contributed
Johan Botha (left) in the title role of Wagner's 'Tannhäuser' with Eva-Maria Westbroek as Elisabeth.
1
2

The world premiere of Tannhäuser was staged at the Court Opera, Dresden in 1845 and the premiere of the revised version at the Opera, Paris, in 1861. History, myth and invention come together to create a unique and powerful drama.

The title character was a real 13th-Century Minnesinger (a German lyric poet and singer who performed songs of courtly love), who inspired a legend that Wagner used as the basis for the opera. He notably added the character of Elisabeth, based on the historical Saint Elisabeth of Hungary, wife of the Landgrave of Thuringia.

The opera's score went through several revisions after the original performances, most important when Wagner added the Venusberg ballet for the 1861 French premiere.

Richard Wagner (1813-1883) was the controversial creator of music-drama masterpieces that stand at the centre of today's operatic repertory. An artistic revolutionary who reimagined every supposition about theatre, Wagner insisted that words and music were equals in his works. This approach led to the idea of the Gesamtkunstwerk, or 'total work of art', combining music, poetry, architecture, painting and other disciplines. It is a notion that has had an impact on creative fields far beyond opera.

Tannh‰user takes place in and around Wartburg Castle, Thuringia, central Germany, and in the mythical grotto of Venus, the goddess of love. Wartburg was the setting of a (possibly legendary) 13th Century song contest, as well as the home of Saint Elisabeth of Hungary (1207-1231), wife of the Landgrave of Thuringia.

It would later become associated with Martin Luther, who translated the New Testament from Greek into German there. The pagan-Christian dichotomy expressed in the twofold setting is central to the opera's dramatic core.

Much of the score of Tannhäuser belongs to the tradition of Romantic opera that Wagner developed and transcended over the following decades to arrive at the new operatic aesthetic of his mature music dramas. In Tannhäuser, he expands mid-19th Century models of melody, harmony and form to take his music to unprecedented expressive heights, both in the vocal and orchestral writing.

The title character's dramatic narrative in Act III, which abandons conventional melody in favour of a speech-based structure, directly points towards Wagner's later works and remains striking in its modernity.

Tickets are now on sale for The Met Opera's 2015-16 season at the box offices and via the web at www.palaceamusement.com, with a value added Palace Card.