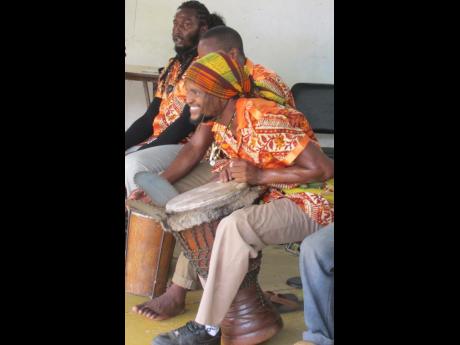 Now, in conjunction with the Charles Town Maroon Council of Charles Town, Portland, the Immaculate Conception High School Symphony Orchestra will embark upon a two-concert ?Abeng? tour. The first concert took place yesterday (March 11) at the Lisa Narcisse Performing Arts Centre at the Immaculate Conception High School. The other will be tomorrow (Sunday, March 13) at noon at the St George?s Anglican Church in Buff Bay, Portland, a few miles from the Charles Town Maroon village.

The tour derives its name from the main piece entitled ?Abeng?. The abeng, made from a bull?s horn, is a very important traditional Maroon instrument with its own vocabulary and language. It was used to send messages across hills and valleys, and play music. Thus, Abeng, will feature the abeng and other instruments of Maroon heritage, such as the low and mid-Kromanti drums, combined with the traditional forces of the symphony orchestra.

?For a number of years I have been looking for an original work for the Immaculate Conception High School Symphony Orchestra. A uniquely Jamaican work which would capture the essence of our diverse cultural heritage and also highlight a number of key elements of this very talented student orchestra ... Last year, Jamaican composer, Andrew Marshall, presented such a work to the ICHS Symphony Orchestra,? Conductor Steven Woodham told The Gleaner.

He continued: ?It is a wonderful work ... which musically narrates the strength, courage and history of the maroon. The ICHS Symphony Orchestra is honoured to have this work dedicated to them and to have the enriching experience of collaborating with seasoned musicians from the Charles Town Maroon Community:?

Guest performers will include master drummers Oniel ?Mustafa Redz? Green and Captain Delano ?Padam? Douglas, a member of the Charles Town Maroon Community Council, and members of the Jamaica Military Band. The tour will prove to be an exciting shared educational experience. Its main purpose is to promote our country?s diverse traditional musical heritage and culture, the orchestra said.

The Immaculate Conception High School Symphony Orchestra was formed in September 1994 and included 25 ICHS students. It was directed by Major Joseph B. Williams. It has now grown into a full symphony orchestra with over 80 regular members, including honorary members from other schools and from the alumnae. The current director is Steven Woodham. The tutors are Helen Bromley, Joseph Campbell, Pauline Gordon, Keturah Gray and Simone Kenny.