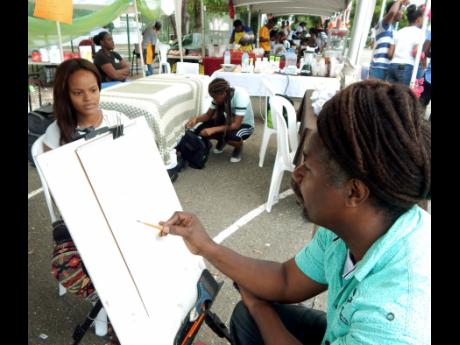 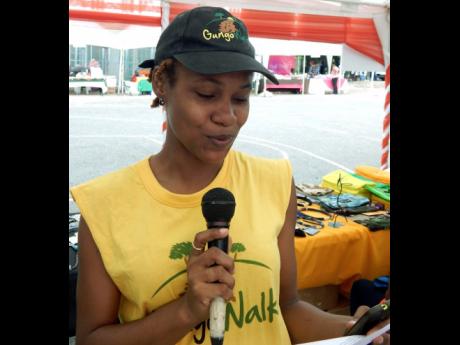 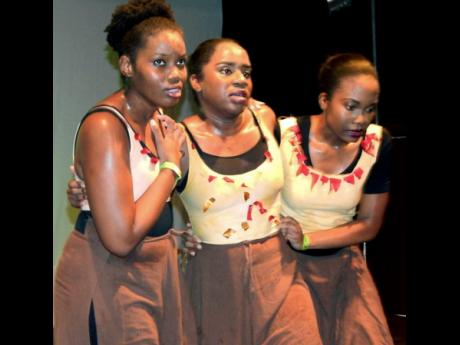 Michael Reckord
Members of Arabesque Dance Collective in ‘Voices’, a dance about human trafficking, performed last Saturday at the Edna Manley College of the Visual and Performing Arts during the 2016 Gungo Walk Festival. 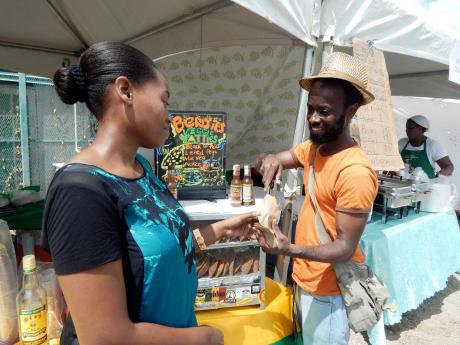 Michael Reckord
Benjamin Asamoah (right) hands a patron one of the ‘yatties’ he sells. 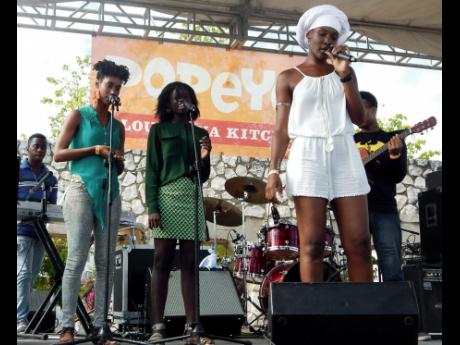 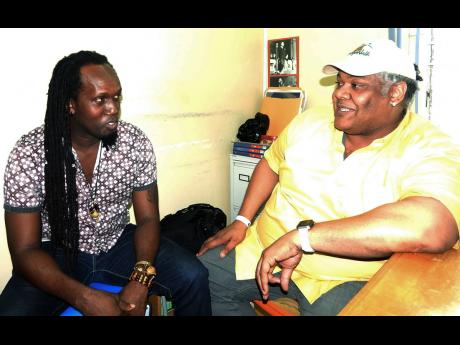 A criticism that could be reasonably made of the Gungo Walk World Alternative Music and Arts Festival at the Edna Manley College of the Visual and Performing Arts (EMCVPA) last Saturday was that it offered too much.

Scheduled to run from before midday to midnight, the event featured dance, drama, film, yoga, reiki, art and craft, food and drink and more at 1 Arthur Wint Drive, St Andrew. These were available in the many tents set up on and around the college’s basketball court, as well as in rooms and studios of its Drama, Music, Art and Dance schools.

While I was being entertained elsewhere, there were other acts.

Natural, who seemed to favour reggae, sang Armour, Revelation, Stay and Rapture. Vendryes, apparently more of a jazz singer, delighted her appreciative audience with three original songs (Desire, Conversation with Music and Earth and Soul) and two ‘covers’, Black and Gold and On and On. Both women told me they were designers with tents at the festival, with Natural specialising in clothes and Vendryes in jewellery.

I saw only two of the events staged in the School of Music’s Bert Rose studio. The first was a dance show by Arabesque Dance Collective and the second a tribute to cultural icon Louise ‘Miss Lou’ Bennett-Coverley by members of the Jamaica Youth Theatre (JYT). The first show left me feeling depressed, but happily, the second lifted my spirits.

After the dancers’ brief, bland opening item, founder and choreographer Keisha Patterson came on stage to introduce the group (which is now 10 years old and has members from four Caribbean territories), invite us to its upcoming season from November 18-21 at the Philip Sherlock Centre for the Creative Arts, UWI, Mona, and prepare us for the main dance, Voices. It was a collaborative piece created over a number of years, we learned, and mainly about human trafficking.

The dance also portrayed attendant ills – poverty, abuse, abduction and violence. Its gloomy, nihilistic mood spilled over on the final piece, Asylum, which featured deranged inmates of such a place. Patterson told me later that it was meant to amuse, but the humour escaped me.

On the other hand, the JYT presentation, written and directed by Brian Johnson, was a joy from start to finish. The talented, award-winning group began with a song/dance Tenk Yu Miss Lou (to the tune Dip an Fall Back) about Bennett’s success in spreading Jamaican culture around the world.

One of our most popular young actors, Akeem Mignott, was the JYT’s ebullient emcee. Among other things, he handed out phone cards to members of the audience able to answer some questions related to culture. One of the lucky patrons was actor and School of Drama graduate Shayne Powell who, minutes before, had given me some good news.

Now residing in New York, Powell said he was in Jamaica to produce and star in the two-hander The Mountain Top by Katori Hall, which on Broadway starred Samuel L. Jackson and Angela Bassett. An imagining of the final hours of Martin Luther King, Jr, the Patrick Brown-directed play will open on September 23.

First mounted in 2012, Michael Sean Harris (Gungo Walk’s co-founder, with Michael Holgate) told me it was conceptualised between 2004 and 2006. Harris, deputy head of the EMCVPA’s School of Music, said he, his students and friends love many other styles and forms of music other than reggae and dancehall, which are so popular in Jamaica. The Gungo Walk Festival was designed to provide a forum for the expression of those other forms.

“Now, we’d like it to become a culture market where people from the US, the UK or wherever, come and see the performers and book them,” Harris added. “I also see it as a movement, a way of bringing together people who are alternate expressions of art. So theatre is happening, and dance, poetry, storytelling and film,” Holgate said.

Stephanie Wallace, a Gungo Walk coordinator and announcer for the day, told me that over the years the festival has been getting good support from sponsors and the general public. “The music community has been very supportive. Over the years, we’ve cemented ourselves on the entertainment calendar,” she said.

The culminating musical event, Armchair Rebelution, scheduled to begin at 10 o’clock that night, was one of the many events I missed. After five hours of consuming the festival’s offerings, I was full.