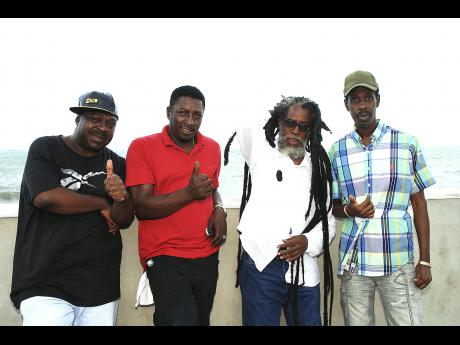 Veteran recording artistes Chaka Demus and Pliers have partnered with Half Pint and Dignitary Stylish to collaborate for a four-the-hard-way record titled Money Man Skank.

The record sees Half Pint remixing his classic Money Man Skank record, which was originally released in 1993. The revamp will feature lyrics on an uptempo reggaeton instrumental produced by Chaka Demus.

Half Pint, who is known for his social commentary and lovers rock hits, told The Sunday Gleaner that he has never considered himself a one-dimensional artiste. Therefore, delivering his vocals over a reggaeton beat did not pose a challenge.

Chaka Demus and Pliers have had much success in the Latin market due to the popularity of Murder She Wrote and are hoping to reintroduce themselves into the now booming market for Jamaican music with the new record. Half Pint, who was in high spirits during a recent interview with The Sunday Gleaner, said that he was up for the ride.

"I know Chaka Demus as a man who has been doing music from morning. He knows when music sounds good, so I allow him to put this track together. We are like the original period of Jamaican music, so for us to collaborate is something very interesting. The more we are the merrier it will be. Chaka Demus and I grew up in the same community, so I expected that one day we would have done a collaboration of some sort," Half Pint said.

Half Pint also encouraged other veterans to get with the times instead of criticising the younger generation of recording artistes and producers.

"This is not the typical Half Pint. We are getting in tune with what is going on right now. Chaka Demus and Pliers dem a bring me into their world, and recording on this rhythm was not hard. Music is not limited, and it is up to you the artiste to be open minded and add your talent to the tracks that are being made today," he said.

Half Pint also admitted that he and his peers, who are now veterans, also endured persecution from the veterans of that time, who felt that the music being created did not reflect their taste. Now considered a veteran himself, Half Pint believes that a generation gap will always have some impact on how new art is viewed by the respective consumers.

"We don't have to live in a time zone like we are stuck. So as an artiste, I exercise my flexibility and I can go on a reggaeton or pop rhythm. It was Bob Marley who famously said, 'we are going to have a funky reggae party, please don't be naughty. I just hope you are haughty and can dance the night away'. So this is a new wave. The generation before me thought we were changing music. But as a human being, we can grow

and be more open minded,"

Dignitary Stylish, known for the classic Jah Send Mi Come record, released in 1986, is optimistic that the record will do well overseas. He says that artistes like Justin Bieber and Drake have given new life to the authentic sound of Jamaican music copied by Latin America.

Chaka Demus and Pliers's most successful project is still their Murder She Wrote album, which was certified triple platinum in England.