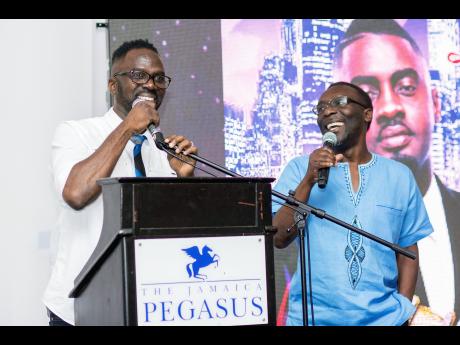 Darien Robertson
Comedians Ity (left) and Blakka Ellis speak at the 'Unity in the City' launch on Tuesday at The Jamaica Pegasus. 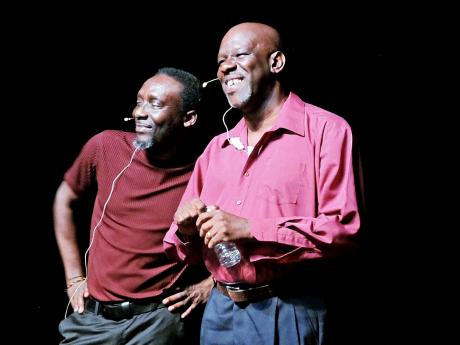 Being touched by the Holy Spirit has not dampened the comedic spirit of Owen 'Blakka' Ellis, who recently publicly declared his growth into Christianity. The two rest easily in the same vessel for, as Ellis told The Gleaner, "God has a sense of humour. That is why He made people like me."

Citing the Christian authority, Ellis said, "Proverbs tells us that a merry heart doeth good like medicine..." (Proverbs 17, verse 22, King James Version). "I don't think there is a contradiction between Christianity and comedy."

Reflecting on some of his experiences on the stage, even before accepting the faith, he linked comedy with a higher power. Once he was hosting a long-service awards function and was in rib-tickling, knee-slapping form, tossing off one-liners that had the audience reeling with laughter. A wealthy banker was invited to speak and he told Ellis, "I envy you and your mind." Without missing a beat, Ellis replied, "I envy you and your bank account."

He attributes the speed and aptness of the riposte to something other than his own wit.

"I could not just think that up," Ellis told The Gleaner. "I know I cannot claim all the credit for what goes through my mind."

And now that he is a Christian, Ellis says, "I will be even sharper."

His comedy has long been literally in close contact with Christianity, as Winston 'Bello' Bell, Ellis' partner in the duo Bello and Blakka, has been a Christian from their outset and is now pastor. They have done one event where all the performers were Christians, but Ellis said he is not going to shape his material in its entirety for members of the faith.

While Ellis acknowledges that there is an approach to comedy which goes for 'slackness' over the top sexuality, in the main "it is not the only way".

"I think the gift of laughter is something God wants us to enjoy," Ellis said. "It should not be too hard for me to utilise devices like surprise and shock without compromising my Christianity."

He gave the example of a joke in which he says "Mary had a little lamb and the doctor fainted. I did that before I became a Christian." And, until there is an inspired voice from God which says there is something wrong with it, Ellis will continue to use the surprise and shock.

However, Ellis said, "I don't think I am going to sit down and write a Christian comedy routine."