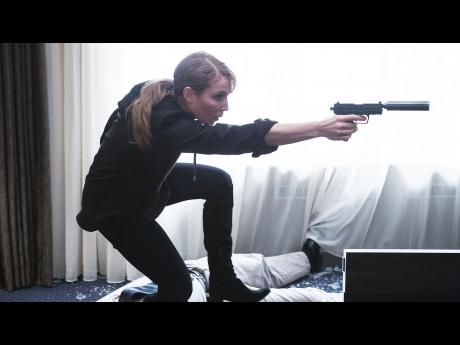 Contributed
Noomi Rapace in a scene from Unlocked.

There are movies that stick with you, lingering on for days, weeks, months, even years after you leave the cinema. Movies that will go so far as to influence the way people think or act. Movies that become a part of a culture.

Then there are movies like Unlocked which, as I write this, I struggle to even recount, much less review. The type of movie that, much like the content covered in this spy thriller, will go unseen by most and forgotten by those that saw it, as if it never even happened.

While I was watching Unlocked, I did find myself enjoying the events as they unfolded. The film opens with a snapshot of the diversity of London, people from all walks of life interacting with one another.

The film's plot involves CIA agent Alice Racine as she is brought it to interrogate a suspect in a potential terrorist threat. While there seems to be the foundation of a film that could provide a meaningful look at Islamophobia, racial bias and other issues surrounding the subject matter, Unlocked has neither the deftness nor the intelligence to provide it.

That can be best explained by its main character. Alice Racine is quite possibly one of the impossibly smartest stupid characters there is. Throughout the film, she will be referred to by others for her incredible skills, skills which she will no doubt demonstrate, only to make a mistake that wouldn't get by a 12 year-old. The plot more or less follows this line of thinking, having moments of brilliance, but then devolving into convention and clichÈ at the drop of a hat embedded with classified information.

The film's saving grace is it's impossibly stellar cast. Clearly, there seems to have been a mix-up of sorts, as Unlocked is filled with extremely heavy hitters. Toni Collette, Michael Douglas, John Malkovich, Noomi Rapace - so many accomplished and entertaining forces of acting prowess in this film. Orlando Bloom is also there.

The script doesn't give them much to do besides carrying out a cartoonish and clichÈd depiction of international espionage. But even at his worst, Michael Douglas can deliver a line.

Overall, if I were to see this on television, I wouldn't hate it. It's a short film, only 98 minutes long; that is perfectly fine if you catch it on cable.