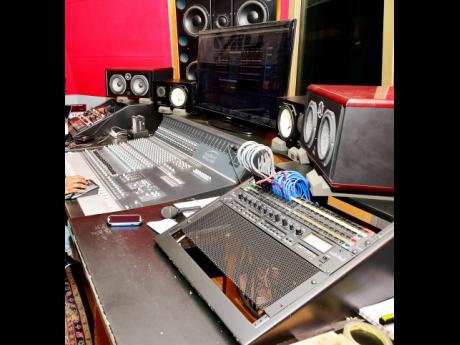 Patrick Planter
The mixing board and other equipment inside a music studio.

Producer Michael Bell, known for his work with Gyptian on My Girl, says some Jamaican artistes put so little effort into the recording process that even entourage members and producers are forced to contribute to the development of the final product.

"Oftentimes, the entourage members don't get any publishing for their contribution, so are exploited as well. After the song is done, some of these artistes refuse to sign the publishing split sheet. That happened to me recently, and it is a regular thing producers face, but no one is complaining because they are afraid of being sidelined."

A publishing split sheet is a document that designates credits for a song.

"Why are they so unprofessional? What is so hard about signing a split sheet? It is hard to do real business with them, and that is why international acts are benefiting more from our music than us; our artistes are too shifty, dishonest and selfish ... and then they make the hype get to their heads and kill their careers," Bell said.

Sophia Clarke, copyright manager at the Jamaica Intellectual Property Office (JIPO), said, "We need to change our mindset and approach to business. If you are a businessman, why would you take it as an offence if somebody tells you to take a business approach?"

She said, "From the initial stages of the production process, a split sheet must be signed by both parties. We have gotten several complaints in our offices from artistes who are concerned about profits from the records and that is because they did not sign their split sheets, and at that point, it is always a difficult situation to rectify," she said.

Clarke noted that JIPO is currently on a mission to educate persons in the music industry on the importance of making the business of music a priority.

"It is standard business practise, nothing shady, but they don't want to sign anything. You need to be familiar with the legal and contractual side of your business if you're to stay in the game and get paid for your efforts. But our artistes don't want to co-operate; they only care about what they can earn right now," Bell said.