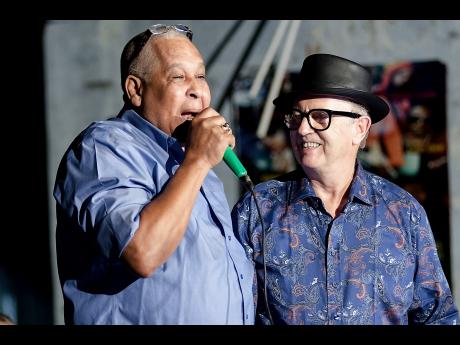 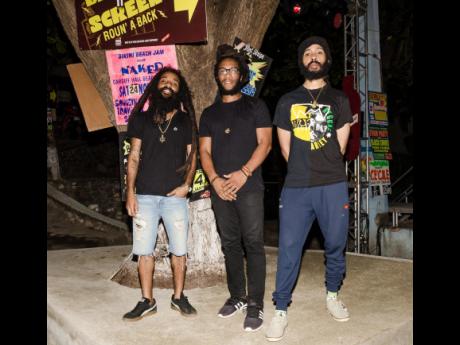 Shorn Hector
The founders of Dubwise (from left) Yaadcore, Jason Panton and Protoje.
1
2

The home of iconic director Perry Henzell (The Harder They Come), 10a West King's House Road, was once again the venue for the ever-expanding Dubwise. Founded by Protoje, Yaadcore and Jason Panton five years ago, the event has since taken flight, making its mark across the globe in traditional dub style. On Saturday, veteran disc jockeys King Jammy and David Rodigan, celebrating Rodigan's 40th anniversary in the business, blazed the 10a stage, enchanting the full-house crowd.

"They are legends, so it's always a blessing to be among the legends. We definitely foresaw that, but not with those acts. We wanted to bridge the gap between the elders and the younger generation coming up. The acts that we got are by chance and by blessing," Yaadcore told The Gleaner.

For the event, Red Stripe decorated the Dub Garden, fixed with a big screen, tables and chairs. Senior brand manager of Red Stripe, Nasha Douglas, told The Gleaner that sponsoring Dubwise was a no-brainer. Recently, the beverage brand partnered with Jason Henzell for the opening of tourist attraction Lover's Leap in St Elizabeth.

"David Rodigan, King Jammy there's no way Red Stripe couldn't be a part of that moment." The majority of Dubwise fans opted to take in the show in front of the stage, transfixed by the masterful displays of the selectors. David Rodigan chose his music from an expansive collection, while King Jammy (with assistance from his son, Jam 2) dubs using two laptops (one for vocals, one for instrumentals), and a mixing board.

"Dub Club is really what kick-started it. What Gabre [Selassie] did was really the catalyst that started everything. Gabre has done an awesome job for the culture and blessed us to pursue this. Sunday at Dub Club on the hill is great, but there needs to be something in Kingston City that people can go to," Protoje told The Gleaner.

"It started as weekly, but has done different things since that. It has grown a lot in the five years," the Sudden Flight singer said. The last staging of Dubwise Jamaica featured international reggae star Chronixx. The instalment also filled the Henzell property with patrons.

Yaadcore was booked on tours across Europe and Africa, and he took the event name with him. "Thus began the international essence of Dubwise," Yaadcore told The Gleaner. The event has travelled across the Caribbean and the United States. Panton is currently responsible for the weekly instalment of Dubwise Miami.