For the Reckord | Magnificent choral theatre by University Singers 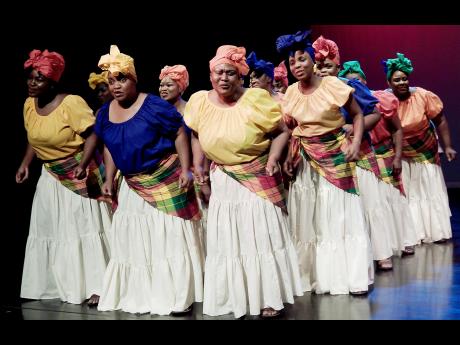 Michael Reckkord
The women of the University Singers in Concert on Sunday. 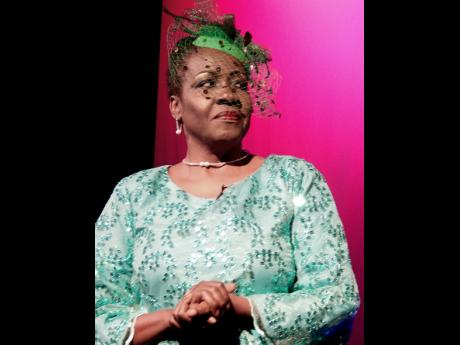 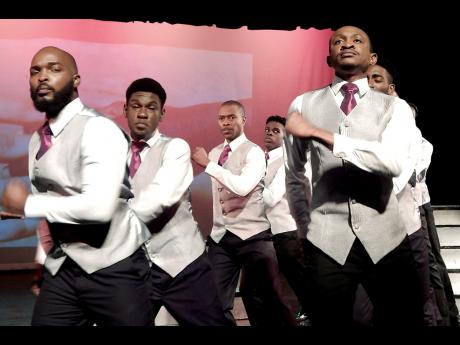 Michael Reckord
The men of the University Singers performing at the season's closing concert on Sunday. 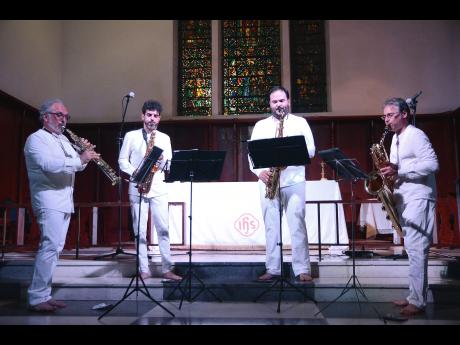 Sunday evening's performance by the University Singers at the Philip Sherlock Centre for the Creative Arts (PSCCA), Mona, drew a range of comments. During the halftime intermission, amid the applause and cheers, two people behind me exclaimed, "Wow!' and "Very good!"

Ad hoc oral reviews after the concert, just one of many activities put on to celebrate the group's 60th anniversary, included one which I fully endorse - "Their best season ever." Others may select a different - "Best concert season." They are usually very good, but all would agree that the current season - as represented by Sunday's show - was magnificent.

Musical director Franklin E. Halliburton has followed the practice of directors before him - and Noel Dexter, the director for 35 years, whom Halliburton succeeded, deserves special mention - and selected the best of the many musically talented university students and carefully honed that talent. Assisted with the group's stage movement for many years by acclaimed choreographer Rex Nettleford, the directors created not just a great choir, but a marvelous choral theatre group.

Sunday's concert marked the official close of the 2018 season, but, happily, the public has one more chance to hear/see them this evening at the PSCCA, beginning at 6 p.m. Music lovers who didn't attend a concert in the regular season should on no account miss the show.

Appropriately, the programme for the concerts was heavily weighted in favour of music composed by Jamaicans. The first of these was Dexter's soulful praise song O Worship the Lord, based on Psalm 122 ("I was glad when they said unto me ...").

The second, Halliburton's Alleluia! Laudes Creaturarum, was one of the evening's highlights. Another praise song, it was an example of choral theatre being delivered not only with voices rising and falling dramatically up and down the scale and in volume and through octaves, but also with movement.

And not only was the choir clapping, swaying and bowing as they sang; Halliburton, too, was dancing as he conducted. One is tempted to be sacrilegious and opine that the opening item, Mozart's powerful Glorious is Thy Name (from Mass No. 12) paled in comparison.

Halliburton is also the composer of the next Jamaican item, Ode to Nana Tano, to words by Barbadian poet Kamau Brathwaite. A solemn piece, delivered as images of slave shackles were projected on a screen at the back of the stage, it captures (as the programme states) "the rhythm of death, melancholy and dispossession on the long slave journey up the river Tano".

Dr Kathy Brown, most often seen on stage as the University Singers' keyboardist, is the composer of the lively I Will Lift Up Mine Eyes, which is based on Psalm 121. As if to show the choir's versatility, the next two Jamaican pieces sung were the bouncy African Pride and the humorous Nuh Live Nuh Weh by Buju Banton and Red Rat, respectively.

The first was arranged by Djenne Greaves, the second by Ewan Simpson and O'Neal Mundle. And all this was just in the first half of the nearly three-hour-long show.

In keeping with tradition, the second half was devoted to folk and popular songs delivered by the choir dressed in colourful folk costumes. The composers were Dexter (Wash Day), Brown (with the "instrumental explosion" African Celebration) and Grub Cooper (One Man Girl). The exciting arrangements were by Dexter, Simpson, Greaves and Mundle, and the concert ended with the energetic High Mass Medley, which was remounted and adapted by Halliburton and Christopher Whyte.

The entertainment value of a choral theatre production was underlined for me on the following evening at the University Chapel. At the invitation of Carmen Rives, deputy head of mission, Embassy of Spain, a saxophone quartet known as SIGMA Project and violinist Cecilia Bercovich performed there.

Not only are they world-class musicians who played beautifully, but the two composers they chose to interpret are among the best - Philip Glass and Leonard Bernstein. And Jamaica was honoured by the fact that we heard the world premiere of the group's versions of Glass' composition String Quartet No. 5 for a saxophone quartet and Bernstein's West Side Story for violin and saxophone quartet.

The musicians also performed three other items not listed in the programme, most notably a peppy arrangement of Peter Ashbourne's Coconut Woman. They deserved the standing ovation they received at the end of the concert for playing good music; but the memory of the colour, movement and general excitement of the choral theatre I had experienced 24 hours earlier, just across the road, still lingered.