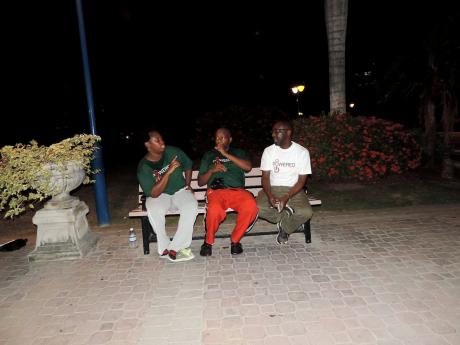 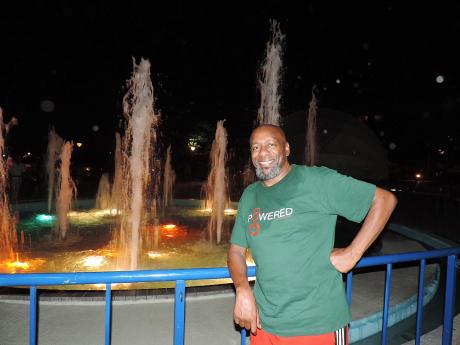 Mel Cooke
Errol Fabien at Emancipation Park, New Kingston, on Thursday night after walking from the UWI, Mona, as part of his Walk2Freedom in 15 countries to celebrate being drug free for 30 years.
1
2

Owen 'Blakka' Ellis laughs as he says Errol Fabien "never answer we" when he and Samara Johnson tried to engage him during the approximately two hours it took them to walk from the University of the West Indies (UWI), Mona, to Emancipation Park, New Kingston, on Thursday evening. Making the Trinidadian's muteness even more unusual is that Fabien uses his voice as a comedian, actor, TV producer and talk-show host, among his multiple roles.

After walking the 13 kilometres down Mona Road (where the street name Palmoral Avenue caught his eye and camera's lens) to Half-Way Tree, then along Half-Way Tree Road to New Kingston, Fabien was ready to break his silence - including explaining his walking without speaking. "In rehab they tell you, 'Walk the walk, don't talk the talk'," Fabien said, noting that in addition to keeping him focused on his goal, there is also time for reflection.

Jamaica is the third of 15 countries on Fabien's 30-hour drug-free (two hours per country) anniversary walk, named Walk2Freedom. Cuba was first, Fabien walking the full length of the famed Malecon seaside avenue and then turning into the city. Next was Belize, where "I walked through and through Belize City". And, after leaving Jamaica on Friday to travel to Haiti via Miami, Fabien was scheduled to do his walk on Sunday evening before leaving for St Kitts and Nevis on Monday. He maintains a schedule of three nights in each country, starting the 240-minute walk at 5 p.m. on the final evening, the stipulation being that it takes place in populated areas.

Fabien's drug-free date is actually March 1, 1988, but getting money together and the availability of his preferred videographer, who is with Fabien all the way except for Belize and Jamaica, pushed the date back. There is no quavering in Fabien's voice or flinching in his direct gaze as he describes himself as not having had a drug of choice, with nicotine, alcohol, marijuana and crack cocaine (he uses the term 'season spliff') among his intake. Fabien's wife was instrumental in getting him into rehabilitation and he went through the 24-month programme at New Life Ministries programme in Trinidad. Three months were residential, with follow-ups over the next 21 months.

By the time Ellis met Fabien in 1991 at a show they performed on together, Fabien had been drug free for three years, but Elllis says "the first day I met him he described himself as a recovering drug addict. After the show everybody go party, he went to his room to sleep to avoid alcohol. I respect that." Ellis joined the walk "because it had a meaning" and wishes to do the journey by foot again on his birthday or another significant day in his life. Johnson said along the walk she did not think of stopping and, having rested a bit by the time she spoke with The Gleaner, said, "I am ready to go again."

The significance of the starting and ending points is not lost on Ellis, who said "you are walking from the bastion of education to a place that symbolises freedom. For me, education is part of my journey to freedom economically." Johnson joined the walk because it "was for a worthy cause, a Godly cause." Also, she said, "the walk was really about our history - the names of our roads, why they were named that way; Devon House, who lived there and what is its purpose now."

For Fabien, the walk was another literal step in the direction he has been on for the past three decades, focusing on setting small, attainable goals and getting through each day successfully. "It is freedom from where I was but, very importantly, it is freedom to do the things I want to do," Fabien said.