Story of the Song | Shoulder moves part of 'Drunk and Stagga' 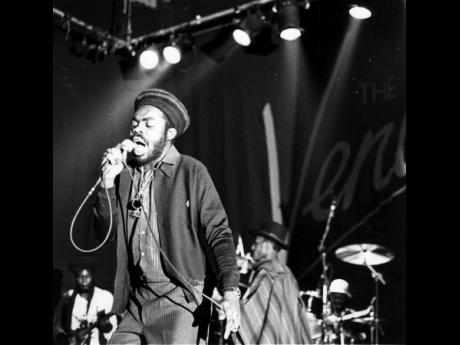 In 1985, deejay Jah Thomas did Shoulder Move, which encourages the listener to "get inna de groove an yu do shoulder move" as part of a full-body engagement with the music to which they were listening. The feet, the waistline ("to de bassline") and head are involved, but the hands are especially important as Jah Thomas instructs "yuh set a fi yu han' inna jockey fashion/Yu move fi yu feet to di riddim pattan".

Now that Jah Thomas has done Drunk and Stagga, recorded about a month ago at One Pop studio on Red Hills Road, St Andrew, there are some specifically mentioned body parts in common between the songs, as he deejays:

"It both reminds me (of Shoulder Move) and inspires me."

In Drunk and Stagga, Jah Thomas checks off a number of current dancehall events where the dance should be done. These include Uptown Mondays, Boasy Tuesdays and Weddy Weddy Wednesdays. The link between dancehall space and dancehall move went the other way for Shoulder Move, as Jah Thomas wrote the lyrics after observing how women were dancing.

As a consistent dance promoter as well as performer (he counts a 1985 session with Volcano and Killamanjaro sound systems on Maxfield Avenue, St Andrew, among his notable events), Jah Thomas had many opportunities to see the dance styles.

"You did have a style name 'Get Flat'. When mi see dem a get low mi say mi have a lyrics fi oonu. Dats why mi say, 'Set fi yu han inn jockey fashion'," he said.

At the beginning of the song, he deejays "From whe day gone dem a talk bout boogie down/I man Jah Thomas have de new dance around," a reference to radio disc jock Barry G (who also operated Wha Dat Disco) who would come on air and announce himself as the 'Boogie Man'.

Jah Thomas did his accustomed testing of lyrics at a dancehall session and, having seen a very strong positive response, recorded Shoulder Move at Channel One on Maxfield Avenue, St Andrew. The Roots Radics, including Flabba Holt (bass), Style Scott (drums), Bingie Bunny and Dwight Pinkney (guitar) and Wycliffe 'Steelie' Johnson (piano/organ), with Sky Juice on percussions, played the music. Among the places he started performing the song at was the Students Union, at UWI, Mona.

Similarly, Jah Thomas plans to perform Drunk and Stagga at some of the events he names in the song, recordings of those intended to be used in the song's music video.