A natural Mystic blows through the air – Mystic Marley 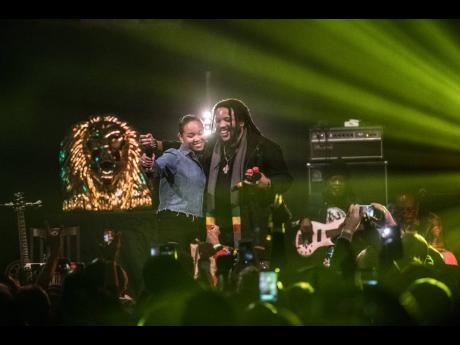 Contributed
Mystic performs on stage with her father, Stephen Marley.

When Bob Marley sang about the natural mystic blowing through the air, he didn’t envision that four decades later, his granddaughter – Mystic – would somehow embody the soul and spirit of that song.

A singer, songwriter and musician, Mystic, the 20-year-old daughter of Stephen Marley, is not one of those locks-sporting neophytes whose music is intoxicated with chants of Jah. Instead, the non-locks-wearing Mystic is introspective. She soulfully croons about themes such as perseverance and adversity, and she tells The Sunday Gleaner that her greatest desire when she writes and performs is that “people can connect with me and find comfort in my music”. It’s not unusual to find her doing acoustic, guitar-driven tracks, and as a matter of fact, the songs on her not-yet-released debut project, Moonboard, are all acoustic.

The young Marley, who sounds younger than her years, but whose lyrics say otherwise, reveals that she always knew that her path in life would be musical. She wrote her first song at age 11, performed at her great grandmother’s memorial in 2008, “and when I was younger, I would join my dad on stage and embarrass myself for 10 seconds”, an amused Mystic told The Sunday Gleaner from her home in Los Angeles.

Mystic recalled, however, that her actions have not always been as in tune with her chosen path as she would have wished.

“I went through my teenage years when I wasn’t as focused (musically), but then I took a trip to Jamaica, and everything fell back in place,” she said, sounding relieved.

Mystic, who released Beatdown, her debut single and music video in June 2018, is slated to open for eight-time Grammy-winning musician Stephen “Ragga” Marley, who kicks off his 23-city US West Coast tour tomorrow. She will support him throughout the latter half of the tour, starting on March 15, just as she did in November last year.“I am very excited! I love the stage. I love performing and feeling the energy from the audience. I am the one who will be going ‘When is the next show? Let’s get it going’,” she said.

With one song officially released and scores of others in various stages of production, Mystic will have a lot to choose from during her stint on stage. However, she continues to spend time in the studio, writing because “I feel when I have a lot to say, it’s best to just get it out on a page”.

For a girl who was born and bred in the United States, Mystic, somehow, sounds like a real yaadie. But as she explains, “My roots are Jamaican. When I was growing up, outside was all LA, but walking into my house was all Jamaican. My mom is Jamaican, my uncles, everybody, so the accent, the language, everything was a typical Jamaican home,” she said.

Inspired mainly by life itself, Mystic lists the Spinners, Amy Winehouse, Jill Scott, Alicia Keyes, her father, and her grandfather as artistes whose music has inspired her. She describes herself in this way: “A 20-year-old guitar player (a little bit), musician, singer, easy, fun presence. I don’t need to be the life of the party, but I’m not afraid to start dancing and break the ice.”

Quizzed as to what she would like the headlines too say about her five years from now, she paused for a moment then answered, “Mystic Marley on international tour, my music up deh on the charts, nothing gossipy.”

“Be devoted to your journey and nurture your relationship with the Most High.”