An amazing ‘Journey, Break Every Rule’ 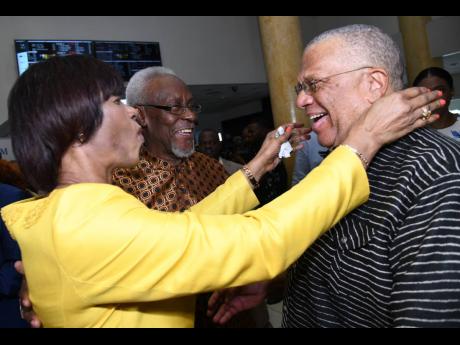 A delighted Little-White explained that Jamaica’s first female prime minister represents three ‘P’s, persistence, productivity, and (putting) people first. That was the focus of the documentary. He shared, too, that the soundtrack included songs from Jimmy Cliff, Journey and Many Rivers to Cross; Shaggy’s Strength of a Woman ; and Tarrus Riley’s She’s Royal.

Hall, wearing the hat of historian, introduced Simpson Miller and noted that on her journey, she broke all the rules “not crime-related, but race, class and gender”. He also challenged the audience. “What has been the impact of Portia Simpson Miller’s life on people, and what will be her legacy?”

Simpson Miller said that she was intrigued by the title, ‘ Break Every Rule’ as she has indeed broken some rules in being a fierce defender of the poor, Jamaica’s first female leader of government, and Jamaica’s first female prime minister. Her journey, she said, was influenced by a number of persons, including her father, when she was growing up in Wood Hall, St Catherine.

Fittingly, Journey, Break Every Rule begins in Wood Hall with a young Portia writing her autobiography. She draws stick people to illustrate her family. The journey to the city is captured in a moving bus. Subsequently, through still shots and video footage, her sojourn into politics takes shape. Her triumphs and successes, from being a councillor of South West St Andrew to being prime minister of Jamaica, inform the 52 minutes documentary.

Each stage was creatively depicted with existing, or well worded sign posts, voice-over of quotes from, and delivered by, Simpson Miller, profound headlines from The Gleaner and interviews with friends and associates. But, no doubt, the most powerful section of the documentary was the never-before-seen wedding footage. This was so not because of the kiss, or the irony in the lyrics of Pam Hall’s I Was Born a Woman, but because of the vision of a radiant, yet vulnerable-looking Simpson Miller projected on to the screen.

The production of the film was amazing, especially the excellent placement of photos, songs and newspaper headlines. But, Simpson Miller’s life is juxtaposed with politics, and so, there are instances when, in spite of the director’s claim, her political life comes to the forefront.

However, Fab 5’s bass player and chairman of the Jamaica Association of Vintage Artistes and Affiliates, Frankie Campbell, in voicing his opinion, said of the documentary, “It was not Portia as PNP (People’s National Party); it was about Portia as a human being.”

While he also enjoyed the emotional moment, he had one disappointment: “It’s a pity we did not get more earlier footage [of her].”

For Simpson Miller, it was enough that “most people said they liked it”.