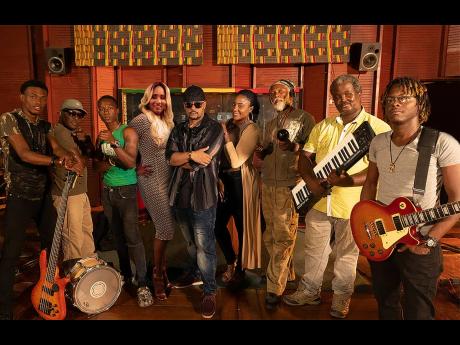 For Mason Di Emperor & The Rebel Soulz band, good music should always be a vessel for spreading messages of love and togetherness. This is exactly what they hope to accomplish through their eponymous debut project, which was released last month. The 13-track set was recorded live at Tuff Gong Studios in one take.

“We created history by being the first band at that studio to record a live EP in one take,” keyboardist and founding member of the band, Rayon ‘Short Boss’ Webb, told The Gleaner. “We decided to do it live because we want the audience to know what we sound like when we’ll be in front of them, and live music is a good way of giving us promotion.”

The set is also accompanied by a 42-minute video recording of the live session, which Webb said will aid in the nine-member band’s visibility.

Rebel Soulz traces its roots to 1992 when the label, Rebel Soul Productions, was formed by singer Mason Di Emperor. He and Webb met six years later and soon began working together, but it was only last year that the two decided to strengthen their ties and reach by forming a band.

“I had worked with Luciano for a few years on his Jah Messenger label, and all along Mason was producing artistes too, but he was still singing,” Webb said. “We found that a lot of these artistes we were taking care of disappointed us at some point; as soon as they felt they were getting their break they decided they don’t need us anymore, and we got tired of that so we formed our own band.”

Mason added that it was an easy decision to combine efforts and form a band as he has always had a preference for live music.

“I am just now really starting to set out as an artiste and I can’t think of a single time I’ve ever sung on tracks,” he stated. “I’ve performed with a jazz band, I was also a background vocalist for Mariah Carey and she uses a band, so live music is what I love and this gives me the opportunity to perform with a band.”

The live EP comprises songs like Save a Life, Kings & Queens, I Love You, Reminisce and Honestly Speaking. All tracks are from Mason’s Overcome (2016), Lover’s Rock (2017) and Freedom (2018) albums. According to the crooner, it proved more feasible to use material the public was already au fait with in promoting the newly formed group.

“It’s not easy to get gigs as a band, especially because of the cost,” he started. “Promoters in Japan wouldn’t want to foot the bill for nine people to go over there for a show, so you have to show them that you are something worth having. My songs were already known by many radio personalities and fans and we wanted to give them a live feel. We ended up doing a whole album instead of just making one new song.”

He shared the project is already reaping praises, which he hopes will continue as the year progresses.

“I’ve had a lot of feedback from the media and fans who all love it and they are even promoting it themselves on social media,” he said. “It’s been a great thing and I didn’t expect to receive this because in this business it’s hard to see people come together and support someone, so when that happens it can be overwhelming to the point of almost tears. I’m hoping this will propel us all forward in the business so we can share the love we have in our hearts with people around the world.”

“Individually, each person loves their craft and can easily perform on their own or with another band, but when we get together and play together, we’re like a real family unit. We want people to partake in that love that comes out in the music we make,” he said.