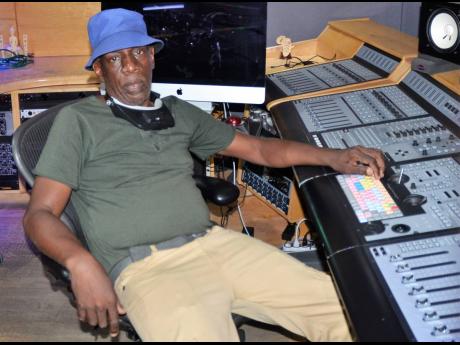 At the core of some of reggae and dancehall’s biggest hits are esteemed recording studios, but beyond the property owners are the people responsible for building the spaces where the magic is made. Martin Mitchell is one such person who has played a pivotal role in carving studios like Music Mountain, Penthouse Records, Black Scorpio, Gargamel and Stone Love.

The venerable electronic crossman was born in the United Kingdom (UK) but relocated to Jamaica in the 1980s, where he started his relationship with electronics and music.

“Back in those days, everybody from England wanted to go work in the Middle East or Libya because what you get after six months in England, you could earn in a week in Libya,” the 62-year-old told The Gleaner at Big Yard Studio in Kingston. “I came here with my Jamaican father, who took early retirement, and I remember when I got off the plane, Immigration told me if I decide to stay here, I’ll have a very good career.”

Mitchell returned to the UK for his equipment and started teaching electronics at Tivoli Gardens High School in Kingston. It was not long before he met then Reggae Sunsplash festival director Robert Lee, who had started construction on Music Mountain Studio in Stony Hill, St Andrew. “I met him when I was at the bank asking if I could borrow a pen. He was intrigued by my accent and invited me to the studio when he found out why I came to Jamaica. When I got there, things were breaking down, so I used to do the repairs, and I also finished off the wiring.”

“I was at Penthouse for a few years and did two studios for him,” he said. “He (Buju) used to come to me and say that he wanted to do the things that I did. I owned a boat, and he used to talk to me about wanting to own a boat, and I would lecture him on how to buy a boat ‘cause it wasn’t expensive. Later, when he became popular, he acquired property on Carlise Avenue and bought his equipment and asked if I could install it for him. I think he designed the room and built everything himself with a carpenter.”

Mitchell’s skill set has benefited not only local studios, but also stage shows. During a stage clash between Ninja Man and Shabba Ranks at Sting in 1990, the amplifiers exploded backstage.

“Promoters would always call me to be at shows just in case something happened, and that night, it took more than an hour to fix the amplifiers,” he said. “The same thing happened again in 1992 at Sting when the generator blew out, so I’ve also been in that industry as well. For the 37 years I’ve been in the business, I put everything I learnt in England to good use – whether it is architectural design, the electronic wiring in the studio, and the repairs and the maintenance.”

He is currently completing work on studios for producer Jack Scorpio and Bunny ‘Striker’ Lee, along with working on Robert Livingston’s Big Yard studio. He says that he has ventured into freelance designing as the studio landscape has changed drastically over the years.

“The demand for studios is going down because a man can buy a cell phone and record a song. There were days I was wiring three, four studios at a time, but now, I’m lucky if I do two every six months, or one every year,” he disclosed. “It takes a lot of money to operate a studio – a mixer can range from US$10,000 to a million – so you have to be in a certain position to maintain that, and people in Jamaica don’t really have that bulk of money.”