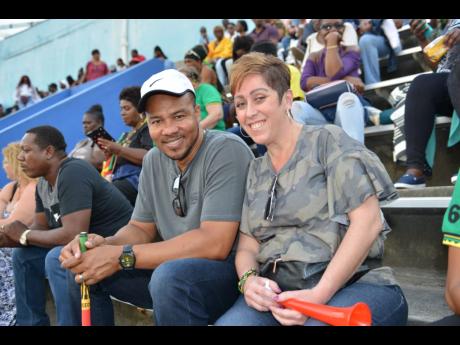 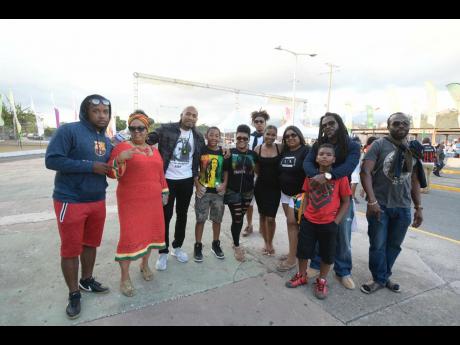 Kevin McGregor (third left) and his wife Curreina (centre) and their cousins, said they started to make arrangements as soon as the concert date was announced. -Photo by Gladstone Taylor
1
2

Thousands of Jamaicans from home and abroad flooded into the National Stadium in Kingston for Buju Banton's Long Walk to Freedom concert, some arriving as early as 2 p.m.

Kevin McGregor and his wife, Curreina, from Tampa, booked the flight for their family as soon as the concert date was announced.

Just as they made it through the stadium gates to Statue Road, they paused for a photo to document the moment they have been waiting for.

“When his release was imminent, I knew I had to come here,” Kevin told The Gleaner. "We got our tickets the day after they went on sale," added Curreina, who had her 10-year-old son by her side.

“From the moment Buju came on the scene, as a youngster, I’ve been a fan from then. I’m a dancehall fanatic,” Kevin continued. "I was right there in Tampa, Florida when the trial was happening - I was vested in the whole thing from before.”

He organised the trip with his cousins who were all fully dressed in Reggae merchandise, from Bob Marley to Buju Banton to Peter Tosh.

“We have to support Buju - the Gargamel. It’s just a wonderful occasion to come in. They’re comparing it to the One Love Peace concert with Bob Marley, and I think that just hits the spot."

Amanda, from Indianapolis, was all smiles as she waited for the bleachers’ gate to open.

“I’ve been in Jamaica from Wednesday. I come to Jamaica maybe one to four times per year since 1990, and this is the most excited I’ve ever been to come,” she told The Gleaner. This concert’s gonna be great. I know it has to be.”

Though Klaleh, from Las Vegas, had some difficulty getting in, she was very upbeat.

“This is Buju Banton. There should never be anything negative to say about this moment right here, right now. I don't mind the long lines or the wait, not for him. Anyone who's mad about the wait or anything, it is because they have never been to an event of this magnitude in a third world country. When you go to an event of this magnitude, this is nothing,” she said.