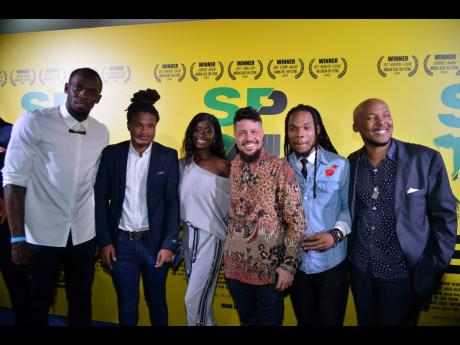 Defiant against the Jamaican film stereotype, Storm Saulter’s latest feature film, Sprinter, goes against the grain. The film is framed in tropical, lush cinematography that, while still capturing greenery and the sea, avoids the resort-life trope.

It is a film that frames crime, but deftly avoids the commonplace cinematic demonstrations of violence. It tells the story of a Jamaican teenager going through the motions – blessed with talent and support, challenged by his aspirations, impeded by attractive distractions, and terrified of the unknown. So far, the defiant approach has paid off.

To celebrate and share in its success thus far, cast and crew of the award-winning feature were treated to an invitation-only screening at the Carib 5 Multiplex on Tuesday. If the audience’s reaction is anything to go by (moments of laughter, collective gasps, and the screams of recognition of popular local faces), then Sprinter has accomplished what it was meant to. As the credits rolled, the cast was presented to thunderous applause.

“ Sprinter is about what it takes to be an athlete; a student; what it takes to come of age in Jamaica –to be young man in the Caribbean. It’s kind of a simple story, in a way. It’s not extreme life or death. Sometimes that creates a sterotype or paints a picture that even though true in some ways, is not everything. I want to show more of the subtleties and in-betweens, the trials that are just as big, but don’t come with that headline,” Saulter told The Gleaner.

The story is simple, perhaps because it is familiar. Sprinter follows 17-year-old Akeem Sharpe, a ‘barrel pickney’ supported by a mother he hasn’t seen in 10 years; a father with skewed priorities; and an older brother who is shadowed by his own dark choices and regrets. On his way from the high-school track to potentially competing on the international stage, Sharpe’s journey gets confused and complicated with the questions of what he really wants to do – and why he wants to do it.

Set against the backdrop of a rural township, Saulter takes the film away from the usual, challenging and sidelining the otherwise predominant view that the most engaging stories are found behind zinc fences, or looking down the muzzles of shadowy, gun-slinging figures sulking in the dark.

According to the film’s executive producer, Zachar Harding, the movie attracted the support of Will and Jada Pinkett Smith’s (Overbrook Entertainment) following their #OscarsSoWhite campaign in 2017 – a call for increased diversity in the global film industry. Saulter believes the attraction came from a certain strength of spirit and continued creativity in the Jamaican creative space.

“I feel like there’s a spirit here, and we say things that echo globally. There’s a certain freedom of creativity – we definitely have people that are inspired and driven to create new spaces and work. We’ve inspired so much art around the world. Not only that – everybody taps into Jamaica and what’s happening here – because it tells a larger pan-African story,” Saulter surmised.