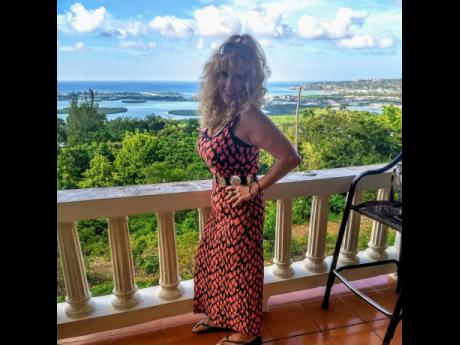 It was 45 years ago when Sista Sensi first visited Jamaica, a place her spirit knew as home, and the Wisconsin native has not been the same since. An entertainer who has made reggae her music of choice, Sensi quietly rebukes those who would accuse her of appropriation because, according to her, she has paid her dues.

Sensi recalls that she told her family when she was 10 that she would live in Jamaica, and they all laughed at her. However, in 1974, she and a couple of friends visited the island and had a blast. “I must have been here in a previous life, or it must be some kind of ancestral memory, but I have a bond with Jamaica that cannot be explained,” the snake-dancer-turned-reggae-singer told The Gleaner.

On her first visit in 1974, she stayed at Ramble Hill, just outside of Montego Bay, and then a year later, she returned and stayed at a popular hotel back then. However, she had an experience that she admits, should have turned her off Jamaica for life, but it didn’t. “The hotel owner sent to say that he wanted me to spend the night with him. I sent back to say that my bills were paid and I didn’t owe him any money, so I wasn’t doing it,” she said.

As Sista Sensi recalls, the following morning, the police turned up at the place where she was staying with her ‘dread’ and carted her off to the station, where she was charged with possession of marijuana. “I was at my dread’s place because I didn’t want to take him to my hotel,” she said. “They found a small spliff stuck in the window, and that is what I was charged for. Of course, it had to be the hotel owner who sent them because my suitcases were at the station, plus, those were the days when Rastas were hated, and they didn’t trouble my dread.”

Sensi was charged and given a four-month sentence or a fine of US$400. She called an ex in the US who promised to send the money, but it was over three months before the Barclays Bank located the funds, sitting in their Kingston office instead of in Montego Bay.

Her time in jail was hell. “The jail cell was notorious. It was infested with rats, roaches and ‘40-legs’. I got sick. Since I’m vegetarian, I wouldn’t eat the chicken back, and I was surviving on bread,” she said. Sensi was admitted to hospital, and after her release, she was later sent to General Penitentiary (GP) to serve the rest of her time and subsequently deported.

But she came right back to Jamaica four months later. This time around, she smuggled her boa constrictor, Jake the Snake, in a pair of panty hose because she was determined to find a job as a snake dancer. She joined the entertainers’ union and Sensi began her career as ‘The Great Snake Lady’, performing with champion limbo dancer Clifton ‘Miko’ Blanco and his dance troupe, Los Tropicanos. She was able to raise her daughter, Kaya Star, and even married a Jamaican man in what was a mutually beneficial union. “I wanted to join the entertainers union legitimately and he wanted to go and live in the US,” she explained.

Of the late Miko Blanco, she stated: “We toured the island and it was wonderful. Miko was a fantastic human being and I am really thankful to him for taking me under his wings and showing me the ropes.”

Sensi told The Gleaner that she and Jake also starred in Eureka, a movie filmed in Jamaica starring Gene Hackman. “They wanted a snake dancer, and Jake and I were available, so it worked out well. We did the scene, and I got my pay,” she said. As for Jake, the boa went back to the US and is now buried under Sensi’s apple tree.

Sensi took a hiatus from performing when she returned to the US to raise her daughter, but it was then that she officially started her music career, recording in studios there. “But it was while in jail that my music career really started, because they taught me Patois and how to sing reggae when I was at GP.”

Also, in 1975, Sensi had lived in a room above the renowned Banana Boat Club in Montego Bay where she was surrounded by Jamaica’s music royalty and was a regular at the daily rehearsals. The house bands were the Sonny Bradshaw Orchestra and alternately Byron Lee and The Dragonaires.

Sensi has since toured with many reggae bands, opening for King Yellowman, Burning Spear, Steel Pulse and many more, but she eventually formed Sista Sensi and The Buds, now known as the B Easy Band.

With three CDs – Blaze It Up, My Jamaica, Fulljoy – and many singles, including collabs with Yellowman (Just My Imagination and Frosty The Dopeman), Josey Wales (Loving Pauper), Mackie Conscious (14), Big Youth (No Jestering), URoy, (Perfidia and Dancing Mood), Sensi is now eager to do a collab with Sean Paul. She has already selected the song and will record it as soon as she returns to the States.

Sensi, who performs annually in Negril from December through to April, is now getting ready to leave Jamaica for a tour of the US Midwest, which will take her until the end of the summer.