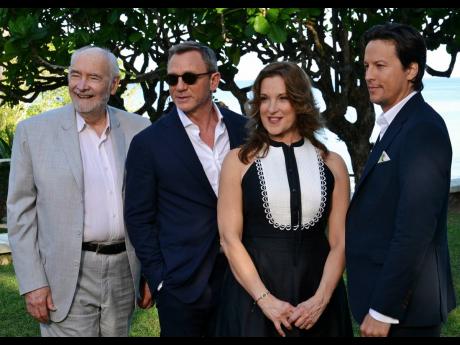 The fictional British Secret Service agent, James Bond, created in 1953 by Ian Fleming while he was living at GoldenEye in Oracabessa, St Mary, has returned home – of sorts.

Yesterday, the producers and cast of Bond 25 (the 25th Bond movie) gathered at GoldenEye at Ian Fleming’s former home – The Fleming Villa – to announce the cast for the movie at a media launch. Set for release in April 2020, the announcement was made by the production team of Barbara Broccoli and Michael G. Wilson and director Cary Joji Fukunaga.

The yet-to-be-named movie will be shot in part at GoldenEye, Italy, Norway, and London. Other Bond movies filmed in Jamaica were Dr No (1962) and Live and Let Die (1973).

Daniel Craig returns for his fifth and final movie as the 007 agent and is joined in the cast by Ralph Fiennes, Naomie Harris, Rory Kinnear, Léa Seydoux, Ben Whishaw, and Jeffrey Wright, who will all be returning to the Bond franchise. Making their debut in the James Bond franchise are Rami Malek, who will be the main villain; Ana de Armas; Dali Benssalah; David Dencik; Lashana Lynch; and Billy Magnussen. Craig has played lead role in Casino Royale, Quantum of Solace, Skyfall , and Spectre.

Jamaica is expected to benefit greatly from yet another James Bond movie, with Jamaica Film Commissioner Renée Robinson confirming that shooting will begin shortly and last for several weeks. Hailing the economic impact of the film, Robinson revealed that nearly a thousand Jamaicans would be employed as a result. Many of these would be persons directly involved in the film industry in areas such as production management and coordination, camera operators and sound personnel, extras, along with others who would be providing backup services such as transportation and accommodation.

“There is a full range of job functions that are being hired by the production team,” Robinson pointed out. Robinson described the filming as a landmark event for Jamaica and an indication that the island is open for business in the film industry.

James Bond returns to Jamaica after 46 years. “Jamaica is the home of James Bond. This is where it started. All the books were written here. We’re ready to bring Bond back home. This is a big deal,” Robinson said.