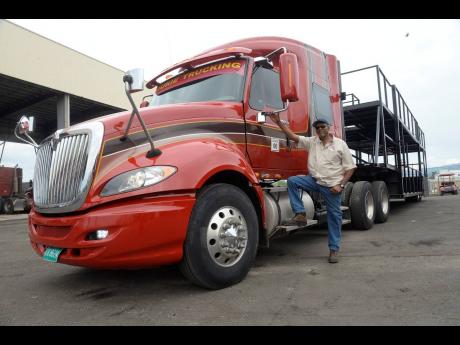 Lionel Rookwood
Driver Lenon ‘Puppy’ Williams standing beside one of the huge trailers that will be on the road on Carnival Sunday.

As revellers flood the streets of the Corporate Area on Sunday, they will be accompanied by a fleet of huge trailers. Since carnival road march began in Jamaica almost 30 years ago, Zoukie Trucking Services Limited has been a constant.

According to the company’s general manager, Duane Marzouca, there are a lot of behind-the-scenes logistics that go into play to allow for a hazard-free march.

“What you’re seeing on the road is just the end product. You’re talking about months of planning, preparing trailers, dealing with sponsors and the different configurations that the sponsors want, and everybody wants to do something different,” he explained to The Gleaner.

A lot of the work includes building truck-bed frames, noting trailer measurements, wheel placements, height of electrical wires, and ensuring that no inebriated partier gets run over,” one of their long-standing drivers, Lenon ‘Puppy Williams, said.

“There are people all around you, and you don’t know what they’re going to do. You have to use the truck sometimes to push them. They’re tired, they’re drunk, they this, they that. You have to know how to move the truck to ease them,” he said.

Puppy and Marzouca explained that the drivers have their own teams, and persons strategically positioned at corners, to help manoeuvre the trailers through blind spots.

“When somebody climbs unto the trailer at a certain spot, the driver has no idea. What you’re seeing on the road is a story book cover,” Marzouca told The Gleaner.

“Someone in carnival doesn’t understand the movement of a trailer when it’s turning. These are things we have to plan for. We have put wheel guards and put people at the wheels. We have people with radios to speak to the drivers at each corner because they can’t see blind spots. If you sit behind the wheel in a tractor trailer, you realise you have a view in front of you, and the rest of the view is blind to the driver,” he continued.

Zoukie’s trucks are used as bars, deejay booths, stages, and more. As such, there are trailer beds built and designed specifically to keep the turntables steady and to stage performances. To accommodate the expanding revellers’ industry, Puppy designed removable frames (to house bars, deejays, and the like) for flat decks so that they can store the frames and use the trailers ‘normally’ during the year. However, he has also designed frames directly unto trailers beds, which stay parked all year.

“We have to do the fabrication for those. In recent times, we’ve worked with other fabrication companies because of the amount coming into play,” Marzouca said.

Among all the bands, Puppy estimates there will be about 36 trailers on the road. “Plus you have trucks that do other things like carry liquor and do drop-off and pick-ups of necessaries.”