2019 Carnival Road March The Biggest Ever 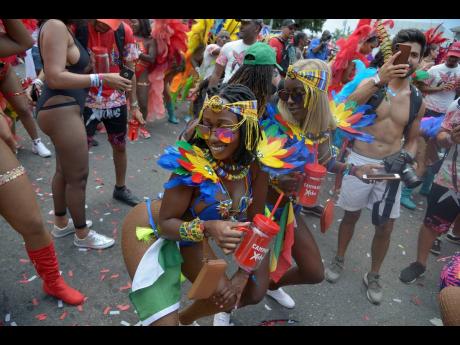 Shorn Hector
Anita Baahmensah from Ghana and Caroline Idi from Nigeria fêteing along the Xodus Jamaica carnival route on Sunday. 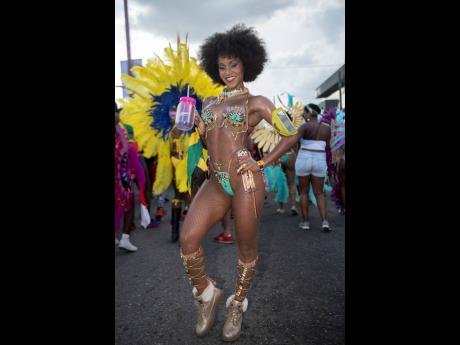 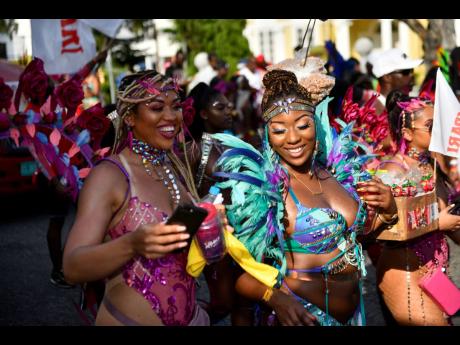 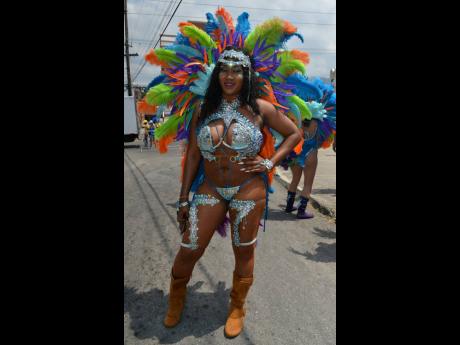 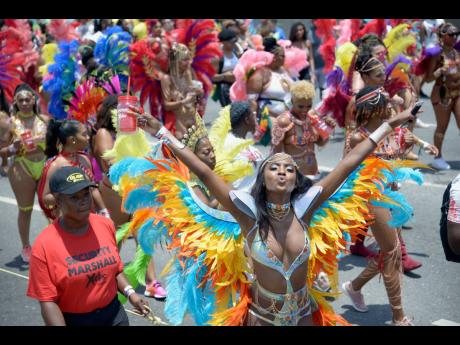 Shorn Hector
Melanie blows a kiss to the camera while partying along the Xodus route. 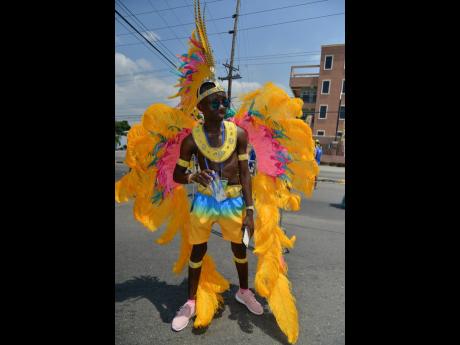 The carnival season in Jamaica climaxed in a colourful spectacle on the streets of the Corporate Area yesterday, with the highly anticipated road march bringing down the curtains on a calendar that had been chock-full of events. The three bands that were part of carnival this year – Xaymaca, Xodus and Bacchanal – chipped down the streets in what many have dubbed the biggest road march in Jamaica’s carnival history.

Xaymaca International, which has been part of carnival in Jamaica for only three years, staked its claim on the soca scene yesterday, attracting what may have been the biggest crowd on the road. Xaymaca delivered on its promise of an iconic experience, rolling out trucks and masqueraders at the indicated 9 a.m. start time. And from start to end, there was never a dull moment.

Before yesterday’s road march, Xaymaca organisers had indicated that the road experience would not have been an authentically Jamaican one if it did not include dancehall music. They delivered on their promise of infusing dancehall with soca, and the crowd loved every ­minute of it.

Entertainer Ding Dong and selector ZJ Sparks were the key persons involved in building the dancehall vibes on the road. Ding Dong and his Romeich Entertainment brother, Teejay, delivered sizzling sets aboard their Xaymaca truck.

Despite getting off to a late start, Xodus revellers seemed very pleased with the march’s execution. Reveller Devon Mahanan, director of customs at the Norman Manley International Airport, has been jumping with Xodus for the past two years. Prior to that, he had been part of Mudders, Jamaica Carnival, Frenchmen and Bacchanal Jamaica.

From his experienced perspective, “Xodus is the way forward.”

Manahan told The Gleaner that Xodus and other new bands stand apart because of a youthful injection into their leadership and planning teams.

With a generous mix of soca and dancehall music, Xodus drew the public out of their homes into the streets. Sometimes they even made it into the crowd long enough to take a selfie and scurry back under the rope before the extraction team found them.

Spectators were able to mingle with the revellers, perhaps for longer than the march’s officials intended. That’s because the band’s forward moves were frequently halted, for reasons known and unknown. Some older patrons commented that the frequent pauses took away from the experience, but the younger patrons didn’t seem to notice, continuously and persistently hailing Xodus as the best experience on the road.

Delays aside, Bacchanal Jamaica revellers have expressed that their time jammin’ on the road was well spent. The organisers explained that their one-hour-late start was only to accommodate latecomers. Not wanting to leave any reveller behind, the production team remained at the intersection of Donhead Avenue and Hope Road until the numbers increased.

At the sound of a couple of honks from the lead truck, the march was jump-started from fans who waved to male and female bodies swaying to music that included Chippin’ by Farmer Nappy, Issa Snack by Nessa Preppy and Soca Kingdom by Machel Montano. The band, whose theme was ‘Invictus’, which, translated from Latin, means ‘unconquerable’, boasted an audience of loyal revellers, some of whom have been participating in carnival in Jamaica for the 20 years.

The road to the lunch spot, Liguanea Golf Academy, was smooth-going, but as the day continued, with the band heading from New Kingston to Waterloo and West Kings House roads, the marshals and various security teams showed strength in keeping the wild revellers protected from the even wilder spectators.

Disc jockeys King Taj, Sanjay and Cruise kept the ears of the crowd satisfied, playing 90 per cent soca music and dancehall crowd favourites like Ding Dong’s Flairy, Spice’s Cool It and Munga Honorable’s Nah Mad Ova No Gyal. Bacchanal Jamaica, despite no live performances, did not disappoint and stuck within fair schedule, ending at 6:38 p.m.

“The crowd participation at this year’s carnival surpassed my expectations. I must say congratulations to the organisers and the various bands. Jamaica needs more of these big events to further enhance our reputation as a ­country of culture and entertainment, and Kingston, in particular, with its designation as a UNESCO Creative City, is truly coming into its own as an entertainment Mecca,” Grange said.

“People had fun today, and we demonstrated that we can party in numbers and keep our people and our environment safe,” Grange said.

She said that the continued growth of carnival opens up more opportunities for wider ­participation among Jamaicans.

“As Carnival grows, I would like to see more inclusiveness in that the jerk chicken man, the peanut man, the ordinary man and woman may have more of an opportunity to share in what is a major ­economic space,” she said.