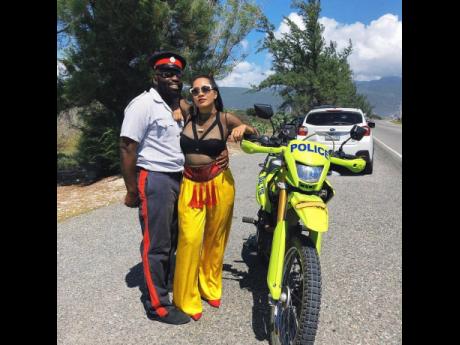 Contributed
Richie Stephens and Singapore-born artiste Masia One in a scene from their music video for the track Jamaican Flava.

Singer and musician Richie Stephens is upping the ante on his mission to popularise Jamaican music in new spaces and places. Alongside his Ska Nation band, the trailblazer toured Europe last year and exposed ska music in countries like Italy, where the genre was unfamiliar. Now, Stephens is looking to Southeast Asia as a possible hotbed for Jamaican music.

“I’ve been busy working on the Asian market, particularly southeast areas like Indonesia, Singapore, Vietnam and Korea. There is great potential for our music to be accepted there,” he told The Gleaner. “Those markets are untouched, and it was just excellent vibes when I went there last year, and I see where the people love it, but need to know more about it, so this is something I am getting into.”

With more than two decades in the music industry, Stephens said he has developed a knack for promoting Brand Jamaica effectively, especially in foreign markets. He noted that ‘outsiders’ should not be castigated for capitalising on Jamaican culture as it also helps with promoting the island.

“As a Jamaican I try to do as much as I can to capitalise on what is going on with my beautiful country, because if you don’t other people will, and that is what is happening a lot nowadays,” he said. “We are famous for complaining and cursing about who is taking this and who is taking that, but the funny thing is if no one was taking then we would really have a problem. The fact that everybody wants a piece of it can’t be a bad thing because we are appealing to the world as a small country. Even with our small size we mean so much to the world, so it is a good thing.”

Complementing his mission, Stephens has collaborated with Singapore-born artiste Masia One, who he met while on tour in Asia last year.

“Masia One was a promoter for one of the shows in Singapore, and I was very impressed with her handling of the event,” he started. “I found out she is an artiste, and we started talking, and I introduced the whole Jamaica vibes, and she shared that Jamaica is one of her favourite places on Earth. The whole idea and vibe to do a song started from there, and it eventually became a reality.”

The song, an upbeat, pop-dancehall track, is entitled Jamaican Flava, and it was recently released on Stephens’ Pot of Gold Productions label.

The musics video, directed by Terminal Four Media, captures an authentic Jamaican experience as the singers visit attractions such as White River and Reggae Falls and even a street dance.

“People have been loving it. We shot it in February and it took us a month between shooting and editing because we wanted it to look right, and people can see that effort,” Stephens said. “We could have just gone to one place and try to mimic the island of Jamaica, but we actually went to the actual spots. Terminal Four came with the storyline, and I helped with the direction. I love working with them because they listen and execute well,” the singer stated.