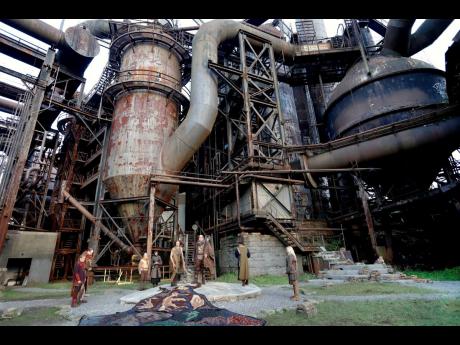 Associated Press
Actor Jeffrey Carpenter (centre) portraying the character King Lear looks over a large quilted cape that depicts his kingdom as he performs in the opening of the Quantum Theatre production of Shakespeare’s tragedy at the site of the old Carrie steel producing blast furnace in Pittsburgh. 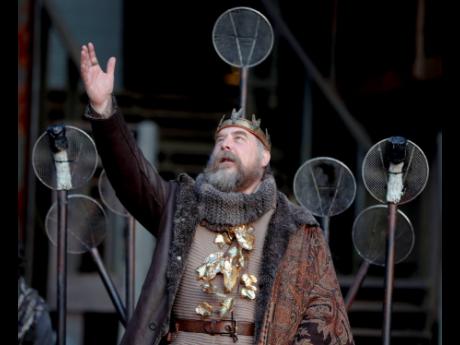 For more than a century, steel mills churning along Pittsburgh’s three rivers helped define the region as one of the world’s largest steel-making capitals until the collapse of the industry in the ’80s. Now, ruins of the industry loom massive and rusting – a reminder of power and loss. Where better to stage a production of Shakespeare’s King Lear?

Quantum Theatre is using the backdrop of the Carrie Furnaces for its production of the bard’s bleakest tragedy, which tells of grief and madness, family values gone wrong, and a powerful king brought low.

“Pittsburgh was once a giant in that particular space. You can’t be at the site without feeling the enormity of industry and the enormity of the fact that the industry collapsed and we were stripped as a region of this power,” said Karla Boos, artistic director and founder of the theatre company. “All very wonderful metaphors for King Lear.”

The Carrie Furnaces are the last remaining structures of what was once the thrumming heart of the Homestead Steel Works, which produced steel used in the Empire State Building, the Brooklyn Bridge and other iconic structures. The furnaces along the Monongahela River were built in the 1880s and operated until 1982. Only furnaces No. 6 and No. 7 remain. They’re among the only surviving pre-World War II blast furnaces in the United States and are designated National Historic Landmarks.

They were also the site of one of the nation’s most dramatic and deadly labour conflicts. In 1892, a labour dispute at the Homestead Works turned violent when striking workers battled armed guards, a pivotal episode in the history of the country’s labour movement. That history also fits into the violence of the play, Boos said.

After act one in the shadow of blast furnace, the audience — armed with flashlights — takes a quarter-mile walk to a garden amid a circle of trees, surrounded by acres of nature that’s reclaimed itself at the site. It’s meant to evoke the English countryside.

“You go from a kind of majesty to a circle of trees in this wilderness and experience the end of the play so intimately,” Boos said.

Director Risher Reddick was especially interested in exploring how Lear is reduced to his most basic elements, as the site of the former blast furnace has been.