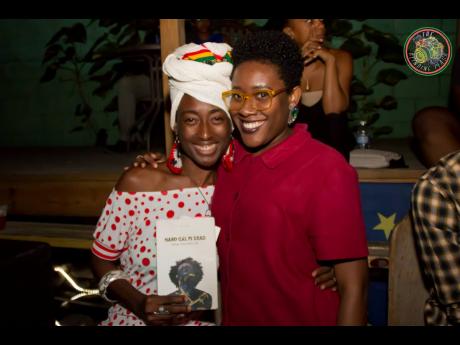 Both need US$4,000 each by Sunday in order to make it to the Vrystaat Arts Festival in Bloemfontein, South Africa, at the end of this month. Completely unaware of the festival’s existence, both creatives were surprised by the invitations.

The deadline for consideration to the festival was in December 2018, but when the festival’s coordinators received clips of the Caribbean creatives in March, exceptions were made. Tsansai is scheduled as a panellist for the Vrystaat Literature Festival, and Queen Zion Ites is expected to participate in the Pan-African Creative Exchange (PACE) intensive workshop.

“They basically said it is way past deadline, but they have to have us. Because it was such short notice, we would have to pay for the trip, but they would take care of us while we are there,” Tsansai told The Gleaner.

But finding US$4,000 in two months is no easy feat. “I went to corporate people, but the time was so short. I tried, and it wasn’t working. We went to the Ministry of Culture – fingers crossed.”

Tsansai and Queen Zion Ites hosted a fundraiser in April, but they were barely able to break even. They have resorted to crowdfunding online, which also has not yielded great results. “They sent me the schedule, and I’m on a panel of international writers. When I saw how massive this opportunity is, I decided to give a final push. South Africa buss Maya Angelou; if I don’t do this, me nuh have nuh sense,” Tsansai said.

Both women were noticed at the launch of Tsansai’s first book, Hard Gal Fi Dead, in February. Queen Zion Ites hosted the book launch, interspersing her own creative expressions between Tsansai’s readings and discussions. The following month, she received correspondence requesting her and Queen Zion Ites presence at the festival.

“Mi never know nuttin about the festival, but it’s a big one. It’s 25 years old. A woman who works at the festival came to my book launch and was impressed. She knows the organisers, so she took a video of me reading, and sent a link to them,” Tsansai explained.

“She also sent clips of Zion Ites singing and dancing, and the response was that we are the kind of people they want – people from the Caribbean. But they didn’t know how to get to us,” she continued.

“This feels like a once-in-a-lifetime opportunity; going to Africa has been a dream of mine for as long as I can remember. I’m a lover of culture from different places all around the world, but going to Africa is definitely a very deep-rooted dream of mine,” Queen Zion Ites told The Gleaner. But fulfilling this dream may slip out of her fingers.

PACE is a biannual arts market for African artists developed for national and international presenters and producers – an initiative of the Vrystaat Arts Festival.

“It also has a dramaturgy lab and a networking forum attached to it. The workshops are geared towards artists and creatives focused on creating successful businesses and business opportunities through audience development and cross-art form marketing. That falls right into what it is I foresee myself doing with Itesology 101,” she shared.

Itesology 101 is a culture and arts production company and retail merchandiser. “It’s my dream and wish to be able to carry along with me some craft from our country to the African people, to represent what we do artistically.”

Queen Zion Ites currently has a GoFundMe page ‘Help The Itesologist To Reach To South Africa’ open for donations. Tsansai can be contacted by WhatsApp at 876-909-9681.